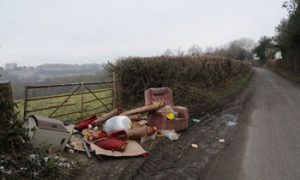 The Parish Council have been advised that Mr Nigel Roberts, who was previously found guilty of fly-tipping over 28 tons of commercial and industrial waste in Walsham le Willows and Acton, was due to be sentenced in Ipswich Crown Court on Tuesday 22nd January at 11.15am.

The two incidents occurred in April 2015, and the scale was somewhat larger than the example in the image.