A walk of about 3 miles following well-kept public footpaths with some stiles to cross. Allow about 11/2 hours. Wildlife abounds on this walk which is named after the common spotted orchids which once flourished around here but which are now restricted to one small patch by the path. Please appreciate them by not picking or removing them. 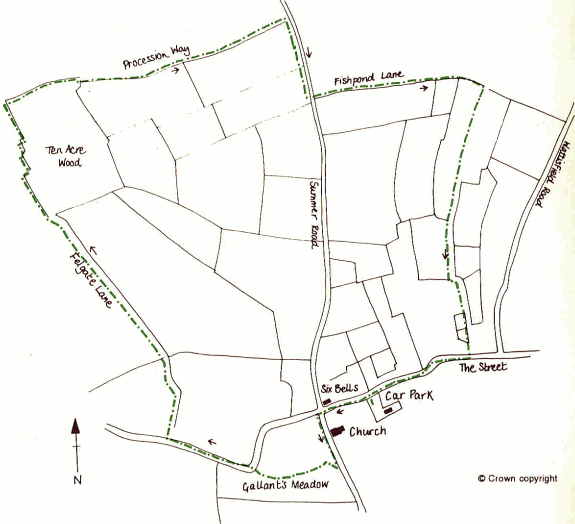 Turn left out of the village hall car park and left again at the church, and then carry on down the Causeway. Just over the bridge, cross over the road and take the stile on your right by the Footpath sign to cross “Gallant’s Meadow.”

A map of Walsham, dated 1817, shows a pound for restraining stray animals, just north-west of the bridge. No sign of it remains now; it was probably just a wooden structure. Walsham is one of the few villages that still has a brick built pound – it is at the far end of the village. (See the Hartshall Lane Walk) The name “Causeway” is a corruption of Corpse Way – i.e. on the way to the churchyard. The bier on which the coffins were carried is to be found in the church.

Using the stile, cross Gallants Meadow, following the stream to a gate by the road bridges. Willow and horse chestnut trees grow along the banks here. The old road bridge was replaced by the new bridge alongside. The relative size of the two adjacent bridges gives an indication of the increase in size and volume of traffic since the advent of the motor vehicle. The speed of modern traffic will be readily apparent to you as you gaze into the stream.

Cross the road carefully on the bend. Following the Footpath signs go through the “gate” and continue through a wooded area downstream of the bridge. This area was badly affected by the hurricane of October 1987 – uprooted tree trunks remain, but the area has thankfully been extensively replanted. In spring the chestnut candles along here are spectacular. 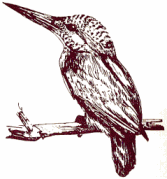 The wooden footbridge over the stream makes a good point to pause and look for the kingfishers and for swallows in the summer collecting mud from the stream for their nests. The kingfishers are less common of course and tend to be seen as a flash of electric blue in the corner of the eye as they dart along the water. Cross the bridge, a muddy patch and another “stile” into a fenced path alongside a ditch. Follow the path around “Noah’s Ark” to Coweel Lane. Noah’s Ark was once a circular plantation, now a pond. As you approach the pond you may well disturb a heron, or harnser as they are sometimes known in Suffolk.

Cowell Lane is crossed as you leave the wooded area. No longer a right of way, this was one of the many paths stopped in the 1819 enclosure. The name suggests that it was once part of a drovers’ road joining up with Posters Lane at West Street which led to the market at Thetford some 11 miles distant (about 5 hours walking or rather more than that when droving!)

The meadow south of the Cowell Lane is lower than the lane itself. This is due partly to drainsge and shrinkage of the meadow and also to the field above being continually ploughed and the soil consequently being pulled downwards forming a lynchet. Cross Cowell Lane and continue uphill along Felgate Lane.

Felgate Lane was probably once Feldgate, meaning field gate. Almost every family kept some animals, so grazing was in short supply. Green lanes such as this were once hedged and ditched on each side and often used as pasture. Gates were needed at each end to prevent animals from straying into the fields. The mixed hedge contains many species, including hawthorn, blackthorn, elder, hazel, maple and ash. This hedge is approximately 600 years old.

The land to your right was once largely demesne land, i.e. land for the lord’s own use. Dovehouse Close or Dufhouswong once contained the lord’s dovecote for the supply of meat for winter use. In 1577, Northall Wood, still part of the demesne land, covered 21 acres and was probably bigger still in medieval times. Nothing remains of it today.

Follow the Footpath signs straight ahead into the edge of the wood and over a series of sleeper bridges to skirt the main wood. Keep to the path, since the field edges are used as gallops by horses.

Ten Acre Wood is a more recent planting of oak, ash and the now less common hornbeam plus two large Wellingtonias.  Keep your eyes open for long-tailed tits among the coppiced trees between the path and the open fields as you make a series of right-angle turns (the last of which puts you on the parish boundary), to emerge on the perimeter of the former Shepherd’s Grove airfield. Out of the wood, the wasteland to the south of the path is home to the delightfully named fleabane, bedstraw and twayblade – who says Latin botanical names are more romantic? Little owls can be seen among the oak branches, and a family of roe deer can often be seen emerging from the wood.

Little remains of the airfield which opened on 3 April 1944 as a base for a series of Stirling squadrons engaged in bombing and transport operations. Gliders were towed from Shepherds Grove to the Rhine crossing operation. The first foreign aircraft assigned to the defence of Britain were stationed here in August 1951 when the USAF moved in with their Sabre jets. Shepherds Grove was a Thor missile base from 1959 until the station was closed in 1963. Since then, part of the perimeter has been used for an industrial development near Stanton, and hangars used for storage; most other signs have been obliterated. The structures to the south of our path are the substantial remains of munitions stores.

Continue east along the field edge (Procession Way) to a stile and gate at the junction with the busy Summer Road. Turn right and for 200 yards take great care before crossing into Fishponds Lane (the second turn to the left). Fishponds Lane is an excellent example of what a green lane should be; hedged and ditched on either side. It is at least 800 years old and the hedge contains at least 16 species, including ash, blackthorn, bullace, buckthorn, crabapple, dogwood, elder, elm, maple, hawthorn, hazel, oak, sallow, rose, honeysuckle and spindle. Nearby is a black poplar tree, once common in Suffolk, now a rarity. The lane originally joined up with Hatchmere Lane and led towards the east of the parish.

Turn right at the first junction, heading you back between open fields towards the village. A pond survives at the junction, making it a sanctuary for wildlife. Watch out for sparrowhawk skimming the hedges looking for small mammals.

Much of the land to the south of Fishponds Lane is held by the Old Town Trust, a charity traditionally providing sustenance for the poor of the parish. Some of the land is let as allotments. After a right angle turn, there are two small hedged meadows on the left, these also serve as mini nature reserves as well as providing grazing. 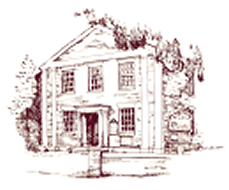 Cross the village street and the stream and turn right along the footpath in front of Bank House. As you cross the stream, notice the hump-backed bridge to the left. This led to the Swan Inn, now Cygnet House, a private residence. The stream flows through the village centre and was no doubt the reason for the early settlement at the cross-roads. The village street is a conservation area containing a rich variety of listed buildings. Some are medieval in origin, others, often red-brick, are Victorian.