The total distance of this walk is about three-quarters of a mile. 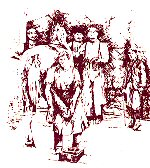 Start the walk at the cross-roads outside the Six Bells public house.

Once known as Fullers, a connection with the wool trade, the pub has been the Six Bells for over 100 years. Next door, the windows of Mapleton’s boot, shoe and general store are unaltered.  The weather-boarded former Guildhall with its fire insurance sign was once the workhouse. Unsupported women and children earned their keep here by spinning.

The first part of the next house, the Dages, was Mr. Death’s cycle shop from 1911 until 1965. In the 15th century, John Page the mason lived here, perhaps whilst building the church. The jettied part of the house was the home of Mr Landymore the tailor from 1911 right up until 1980. His workshop was in the wooden building in the yard behind.

The Old Stores was a grocers and drapers run by William Clamp and Son then E.R. Daniels.  It closed in 1973.  Barn House, an early barn conversion, was the home of Bakers the builders between the wars. The garage at the back was the workshop.  Next door, in the red brick cottage, George Seaman repaired boots and shoes, followed by Mr. Lovick who mended clocks and watches.

The back part of the Tiled House was used for boot and shoe repairs by Mr.

Nunn, remembered for his wooden leg.
John Collins had a fried fish shop in the cottage next door – he delivered fresh fish by pony and trap. A yard runs alongside Holly House and behind the old Post Office, this is where Harry Nunn ran his building, milling, undertaking, wheelwright’s and ironmongery business.

William Chilestone had a grocers and drapers at Commerce House in the 1930’s. You either made your own clothes, buying the materials here, or ordered them from the village tailor or dressmaker. The Post Office was also a chemists and stationers. Mr. Harrington had medicine bottles made with his own name on them. George Phillips took over from him in 1912.

Harry Nunn’s ironmonger’s shop was where, amongst other things, you bought mantles for your oil lamps.

house.  Local people remember the arrival of the first motor car when Mr. Dorey had the garage. Then you will come to Rolfe’s of Walsham which is the only shop still surviving.  Animals were once slaughtered at the back of the shop.

Continue to the Maltings, built in 1842, once known as Brewery Corner, at the Wattisfield Road junction.  Previously there had been blacksmiths on the site.   Mr. Granger, who farmed at Cranmer Green, sold his own meat in the building around the corner.

Retrace your steps and cross the village street and the little arched bridge.  This bridge led to The Swan public house, now Cygnet House. Fried fish was once sold here and wet fish was delivered by bike.

Continue back along the Street, past Clarke’s, a builder’s merchants since 1873. At the end of the path is a house called Coopers where Zachariah Meadows made beer barrels 150 years ago. The garage of this house was later used by William Pollard to sell game.

Bridge House was Clamp’s the blacksmiths. Children from the school next door used to stand on the bridge watchng horses being shod. The hairdresser’s shop once belonged to Mr Flatman, who owned the mill along Wattisfield Road. Corn, flour, meal and dog biscuits were sold here, the shop stayed open until 9pm on Saturdays for people to pay their bills after work. George Pamment, a haulage contractor lived at Avenue House, he had the first lorry to be seen in Walsham. Mrs Clamp had a sweet shop in Avenue House (Avenue Stores).  Her husband, a harness maker, worked in the  building at the side. Earlier, the village fire engine was housed here. Harry Nunn supplied the horses and driver.

The Old Bakery was where the cakes and bread baked at the Bakehouse were sold. Mr. Kenny’s horse and cart and then his van are remembered by many local people. You could take your own pies to be baked there as many people were without ovens. The jettied part of Clive House was used by Arthur Aldridge the tailor.  Walk past the bowling green.  The first cottage of the line of three was the workshop of William Last, the gunsmith and watchmaker at the end of the nineteenth century.

The garage at the rear of the semi-detached cottage was Mr Blizzard’s butcher’s shop with it’s window facing onto the yard.  Ice was delivered every Wednesday by the lorry load – no deep freezers then!

Maplestead once had a workshop built on the front, the line of which was visible until a recent renovation. Thomas Colson, tailor and woollen draper, worked here.

A blacksmith had a forge in the building behind the Blue Boar.

Turn into the path by the side of the churchyard where at The Beeches, a doctor had tended the sick and injured since the start of the 20th century. Next door is the Priory, once Church House Manor, belonging to Ixworth Priory.  Carry on to the Causeway and then turn left.  On your right, over the bridge, are two sets of mock–Jacobean cottages built by John Martineau for his estate employees early last century.  Look out for the texts carved on each of these houses.

Despite the variety of trades and occupations, most people worked on the land or as servants until after the Second World War.

A short walk back up the Causeway will return you to your starting point at the cross–roads. Time for a refreshing drink in the Six Bells or The Blue Boar!