This walk is 3 – 4 miles along public rights of way featuring local and natural history points of interest. download pdf guide 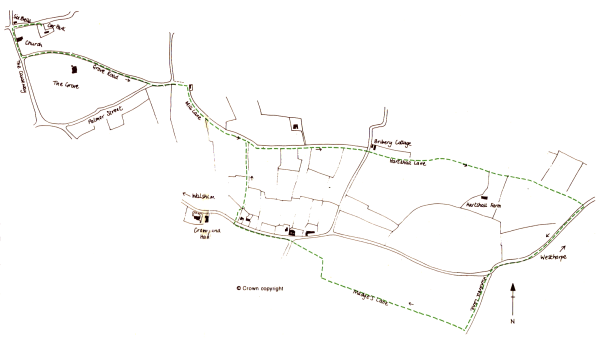 The route makes use of some of the ancient paths which formed the transport and communications network of the country in times past.

Turn left out of the Village Hall car park and then left again by St. Mary’s Church, down to The Causeway.

Immediately after crossing the stream, turn left into Grove Road, continuing to the end where you turn left to join Palmer Street. The ancient Pound is at the junction of Townhouse Road and Palmer Street. The brick-built Pound was once used for holding stray animals which would otherwise damage crops. Although not unique, few parishes still have one in such good condition.

Take the track past the Pound (Staples Way) and turn almost immediately right before the old cottage up into Mill Lane, keeping the hedge and small ditch on your left. Mill Lane, now reduced to a narrow field edge, was for 700 years a wide green lane, hedged and ditched on either side. It was used as a route for horses and carts to Westhorpe and for access to the mill. The name of the lane – le Melnemere – first appears in a document of 1318. All the common shrub and tree species are represented in this hedge, including old man’s beard (wild clematis) which is now rare in Walsham.

At the junction of paths, keep to the left and continue across the road known as Bribery and on into Hartshall Lane. In a survey dated 1581, Bribery Lane was called Market Way or New Way. It led to the market and fair held at Botesdale and was made some time after Mill Lane and Hartshall Lane, bisecting them.

Hartshall Lane has nothing to do with Harts (deer). The earliest spelling, from 1316, is Hordeshawe. Apart from Fishponds and the Hundred Lane, this is the only green lane remaining in the parish. A good hedge for most of its length, it contains varied species averaging out at between 600-800 years old. There are rushes growing beside the brook (which flows into the village stream), primroses and cowslips in the spring, and other flowering plants all summer. Watch out for butterflies. The Hartshall Lane path was cleared by Suffolk County Council in 1992 and will need lots of walking to keep it open!

Turn right along the road for a few hundred yards. This stretch of road is part of the Hundred Lane which is ancient, being of Saxon origin and at least 1,000 years old. It has a long history as a significant boundary, marking the meetings of Blackbourne and Hartismere Hundreds, Walsham and Westhorpe and the old counties of East Suffolk and West Suffolk. When Westhorpe road was made, the existing path was incorporated into the route along this section.

Turn left along the field edge approximately 300 yards after the buildings of West Farm, keeping to the west (right) of the hedge. This is a continuation of Hundred Lane. Turn right along the row of remaining trees. The trees mark the route of Madges or Hyewood Lane, once a wide green lane and part of the parish boundary. The high wood (Hyewood) was better known as Lady’s Wood which was held by Walsham Manor on and over the boundary with Badwell Ash.

Cross the brook. This is the same brook which you crossed in Hartshall Lane. Turn right after approximately 200 yards (halfway from the brook to the Badwell Road) then left at the halfway point to the Westhorpe Road. This path will take you past a pond on your left to the junction of the two roads. The field book of 1577 states:

This is that pond and Well field is the large area of arable land that you have passed on your right. This is another of Walsham’s large open or common fields, ploughed in strips by peasants in the Middle Ages.

Headlands were formed where the ploughs turned at the end of the strips, dragging the soil with them. They were then used for access to the strips, as footpaths and, as with any odd pieces of land, for grazing. Although ploughed out long ago, this headland between the pond and the Badwell Road is called Paintour’s Headland in the field book as it was held by the Paintour family.

Join Crownland Road heading west towards Walsham. There were more houses along this stretch, both next to the existing ones and on the other side of the road. The area was known as Upstrete (Upstreet) and was one of Walsham’s hamlets. The last house was demolished within living memory. Turn right over the stile at the Footpath sign, cross the meadow keeping to the right, next to the garden of Crownland Farm.

Walkers of a less nervous disposition may find the information roughly half-way through the Three Windmills Walk concerning this meadow to be of interest!

Cross the stile at the back of the meadow and the sleeper bridge over the ditch. Follow the footpath to the north, keeping the hedge and ditch on your right. When you meet Mill Lane at the junction of ditches, turn left down Mill Lane to the pound. There is a good view of Walsham from here, clearly showing its linear valley development.

There are various routes back to the village hall car park, either left along Palmer Street and down the Causeway to the church, then right into The Street, or right down Townhouse Road and then left past the new Elmside development and along the length of The Street.