A walk of about 3 miles following public footpaths and roads, visiting sites where three of Walsham’s windmills once stood. 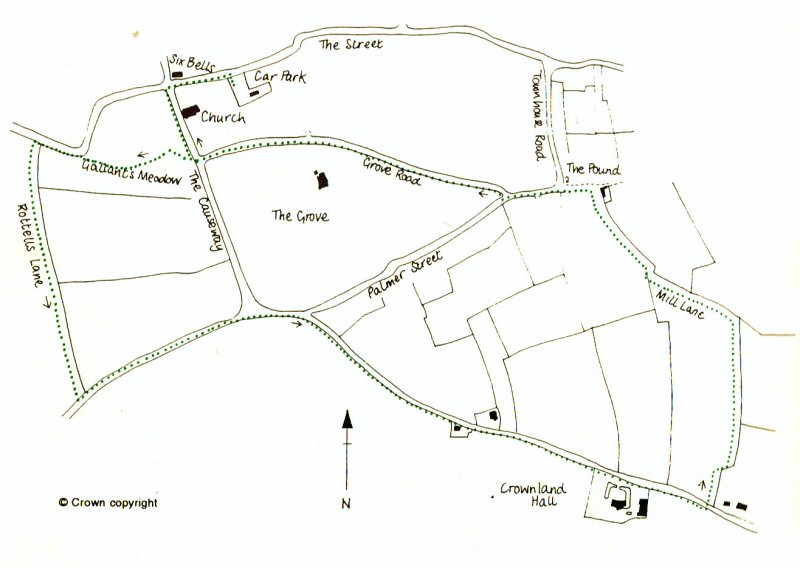 Turn left out of the Village Hall car park and then left again by the church into The Causeway, go down the hill, cross the road by the bridge and follow the Footpath sign to your right across “Gallant’s Meadow.” The stream running through the meadow starts at the far east end of the parish, flowing through the village to the far west end of the parish, irrigating the old “Lammas Meadow” before continuing it’s journey to Ixworth where it joins the Blackbourne River.

Leaving the meadow by the gate, carefully cross the road on the bend and then cross the wooden footbridge. Follow the Footpath signs, through the “gate” and continue through the wooded area down-stream of the bridge. Look out for another stile on the left hand side of the road taking care in crossing this busy Ixworth road. The stile leads into “Rottels Lane,” now a broad grassed field edge.

Two of these stiles/gates can be avoided by turning left out of Gallant’s Meadow and walking about 100 yards alongside the Ixworth road to the stile on the left at the foot of Rottels Lane. However this method is not recommended as you will be walking alongside a busy road with traffic approaching you from behind.

Rottels Lane was diverted and straightened in the 18th century. The most northern half of the lane is older and the hedge is noticeably richer in species than the southern half where a new hedge was planted. The lane was also known as “Hoxens Lane.” The views back towards Walsham, with the meadows, mature trees and the church in the middle distance, are lovely at any time of the year, although in winter the wind can bite across the fields, especially towards the top of the lane where the land rises, affording extensive views down to Badwell Ash. To the west of the lane a plantation of trees has preserved the site of the medieval West Mill (only fragments of the ditch remain – on private property).

Now turn left along Badwell Road. This stretch of Badwell Road is typical of many roads with wide verges which were used for grazing in the past, when most families kept animals and no odd corners of land were wasted. Grass cutters came on two and four legs then! Here the verges have grown into copses making an attractive entrance to the village especially in spring and autumn when the trees look their best. Small birds are plentiful here making use of nesting sites as witnessed by the frequency of jays and magpies trying to find them.

“Thieves Hedge”, really the name of the field rather that the hedge, has nothing to do with robbers – a theve is a two year old ewe. (The earliest spelling, Thevesheg) Follow the road past the triangle of Four Ashes (sadly, the ash trees are no longer standing), bear to the right into Crownland Road. The house next to the pond was the mill-house of a windmill which stood here in the 18th and 19th centuries. It is shown on Hodskinson’s map of 1783. In the Suffolk Chronicle of 1835 it was advertised for auction as “a post mill with two pairs of superior French stones, a round-house and about half an acre with a shed plus a house” and appears for the last time on the Ordnance Survey map of 1881. 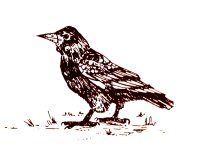 The land opposite the mill was named “Short and Long Lizzards” on the 19th century maps. This is a corruption of Cowleswe, meaning medieval common cow pasture. The land here is particularly heavy, unsuitable for ploughing by early implements. In the 14th and 15th centuries men were repeatedly fined for digging clay here, presumably for building purposes.

Continue past Crownland Hall one of our two moated houses. Turn left at a Footpath sign and stile on your left, keep to the right of the small field to reach the second stile.

In the 17th century, dissenters from the established church were not allowed to be buried in the churchyard. The parish register for 16th November 1656 states: Joseph Witting, singleman dyed and was put into a hole in Thomas Cookes orcheyard on the next day by the Bretheren of the Separation. The “Bretheren of the Separation” were early Congregationalists. You have just walked through Thomas Cookes orchard!

Cross the ditch, turn right for a few yards then turn north keeping to the left of the first hedge until you meet Mill Lane at a junction of ditches. You are now at one of the highest points in the parish, the perfect place for a windmill! To the east is the site of the windmill which is mentioned in the field book of 1577. It had already been demolished by that date but was still within living memory. Considerable numbers of medieval pottery sherds were found here, the miller’s broken pots and jugs. Until very recently it was enclosed all round by hedges and was easy to find. It is nearly opposite Folly Hall, a luxury barn conversion. One other, The Mill House,  in Wattisfield Road, continued to operate until quite recently, and its round-house is the only visible sign of Walsham’s four windmills. Admire the view before you move on. 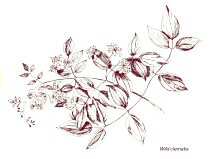 The area south of Mill Lane was once an open common field and has been used for agriculture for over 2,000 years. Its well-drained, south-facing aspect made it very attractive. During the medieval period it was ploughed in strips by villiens; by the 17th century it was largely used as pasture, and by the 19th century was a mixture of small hedged fields of varied use. Turn left along Mill Lane. Once a wide green lane, hedged and ditched along each side and at least 700 years old, it is now reduced to a narrow field edge. The hedge contains wild clematis(old man’s beard), rare in Walsham as it is a chalk-loving plant. 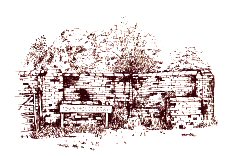 At the junction with another path turn left, following the field edge back towards the village. At Plantation Cottage turn left along the track and find the brick-built Pound once used to contain stray animals. Dating from the last century, it is one of only a few left in Suffolk and has recently been restored. Continue left and bear right into Grove Road. This junction is the site of a medieval cross – Staple Close.

The Grove was built of white brick and slate in the early 19th century by Samuel Golding, a wealthy solicitor. The Avenue was made to give a vista and access to the village, and now makes a pleasant short-cut for the residents of Grove Road and Staple Close. Continue to the end of Grove Road, turn right to cross the Causeway bridge again below the church, and continue up to the crossroads where you will turn right into The Street and then turn right again back into the car park.