A country walk of 2-3 miles along public paths, rights of way and quiet roads at the east end of Walsham parish.

The start and finish point for this walk is Angrave Cross on the Westhorpe Road, where it is usually possible to park a car considerately, on the verge near the entrance to Botany Farm. 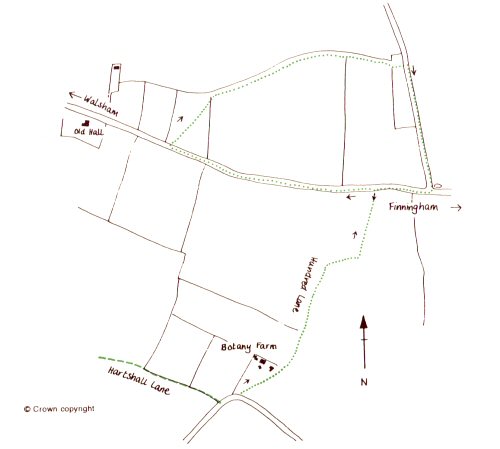 Vegetation does grow up very quickly at certain times of the year, so be prepared for a country walk rather than a paved foot way. A pair of secateurs are useful for cutting back overgrown branches and brambles on many walks in woodland and green lanes in East Anglia!

If you prefer not to be dependant on the car, a pleasant pedestrian route from Walsham to the start is described in walk 2 (The Hartshall Lane Walk) as far as Hundred Lane. But instead of turning right along the road at the end of Hartshall Lane, turn left to reach Angrave Cross in a few yards. This route, if used both out and back, adds approximately 4 miles to the walk. Another possibility is to combine this walk with the circuit described in the Hartshall Lane Walk, making a combined distance of some 6 miles.

From Angrave Cross, the obvious path to the right of the entrance to Botany Farm leads north along Hundred Lane. There is no evidence of a stone or wooden cross at Angrave Cross, just the cross-roads of two, formerly busy routes for pedestrians,horses and carts. In 1992 Suffolk County Council cleared the choked lane which had become impassable. The lane is now a classic, with ditches on either side of the raised bank which forms the path. In summer it is truly a “green lane”. The abundant shrubs on either side of the path are a haven for wildlife, and the canopy of leaves lend a magical quality to this quiet and ancient route and boundary line which, in this section, dog-legs from Angrave Cross to the Finningham Road.

To your left, to the south side of the road, apart from the small piece of woodland, the land was worked during the medieval period as an open field. Although there are no hedges in these large areas of arable land, wildlife thrived on the headlands and in the small woods. During the 16th and 17th centuries, the field was largely used as pasture for dairy cattle and, up to the mid-20th century, it was comprised of 24 small fields, some pasture, some arable. The land on your right was part of Allwood Green before it was enclosed and made into eleven small fields, with names such as Sheepcote Close and Little Butteshall.

At the Footpath sign on your right, cross the field diagonally towards the hedge and headland. This is an ancient footpath which once led from High Hall to Gislingham. High Hall, or Wildcattes as it was also known, was one of Walsham’s medieval manors enclosed by a moat. 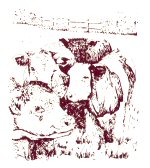 Rentals and court rolls for the manor, show the land it held at this end of the parish, then known as Eastend. Eastend was one of Walsham’s hamlets consisting of several dwellings close to High Hall. Stay on the south side of the hedge and stream. Follow the stream and Hedge eastwards. The land on your left was largely the demesne land of the manor; a large wood called Netherhallwood and extensive pasture were here. Earlier activity in this area is evidenced by a Mesolithic flint axe which was found here, having been mislaid between six and eleven thousand years ago. There is a quince tree growing in the hedge.

Go through the gap in the hedge (a bit of a scramble!) and bear left to skirt the field until you reach the road. Turn right, back towards the Finningham Road. This road was made in 1819 across Allwood Green when it was enclosed. Across Britain almost all traces of the ancient “open-field” system of arable farming disappeared. Between 1760 and 1820, over 7,700 square miles of open field and common land were enclosed. The process of enclosure involved wealthier farmers and landowners taking over land previously farmed by peasants who could not demonstrate legal ownership.

The green, which covered a huge area stretching into Finningham parish, was shared by several parishes at that time and, upon enclosure, Walsham was allotted 86 acres of the immediate area to your left. Town Farm, on your right, was built for the manager of the plots of land which were left to the parishioners to compensate them for the loss of their grazing land. This is a typical enclosure landscape of straight roads and hedge boundaries of blackthorn and hawthorn.

By 1835, some 49 acres were let to the parishioners for “spade husbandry at 25 shillings per acre,” the object being that the parishioners would be more self-sufficient and rely less on parochial relief. In 1954, the farm was sold, and money from the sale invested for village interests. 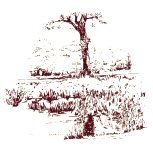 Continue until you reach Finningham Road. The delightful pond on your left near the junction is one of the few left in the parish. They were once essential for watering the horses that pulled the ploughs and harrows, but have mostly been filled in since World War II. Moorhens however make noisy use of the pond today. A small farm reservoir has increased bird interest in this area. Canada geese are often seen grazing and sometimes quite large flocks of gulls and occasional visiting waders can be seen.

Turn right along Finningham Road until you reach the entrance to Hundred Lane again. On your left is another part of the Hundred Lane and the parish boundary. The narrow strip of field on the left is a further remnant of the common land.

Turn left into Hundred Lane to retrace your steps to the starting point at Angrave Cross.