A Village Family: The Nunns 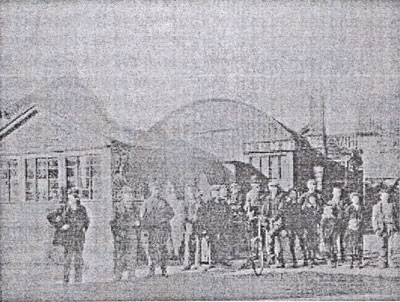 The surname Nunn can be seen in the parish records as far back as the mid 16th century. Most of today’s family members can be traced to James Nunn who married Elizabeth Rolfe in 1792. A possible route back before this time depends on this James being the one baptised in 1746. His parents were Thomas and Ann Nunn. Thomas was possible baptised in 1745 the son of Thomas and Mary Nunn who married in 1741. Thomas is recorded as coming from Burgate.

One of James amd Elizabeth’s sons was also called James. According to the Chapel baptism records of his children he was married to Elizabeth Williams. The earliest major census printed in 1841, shows James as a farmer living in Wattisfield Road, possible Squirrel’s Hall. It seems by this date wife Elizabeth had died and the household consisted of four sons, four daughters and a servant Mary Ann Cammel aged 20. Later that year one of the sons Robert who was aged about 18, married Mary the servant. Ten years later the census of 1851 shows them living in Wattisfield Road with four young children. In 1861 they are still there but now with nine children and Robert described in the census as being a builder and a farmer employing six workers. One of the sons is named Harry aged ten.

It is said that two years later Robert’s wife Mary died of smallpox and because of the fear of infection the horse drawn funeral bier was not allowed to come through the village but reached the churchyard by way of Fishponds Lane and the Summer Road. As Harry had earlier survived the disease he was deened to be immune, thus it was he alone who walked alongside his mother’s coffin and witnessed the burial.

The census of 1871 shows Harry’s father Robert is still living in Wattisfield Road but now with his second wife Sarah who was born in Godmanchester. She has given birth to two sons Peter and Tom. Harry has left home and is now boarding in the village with and apprenticed to Henry Drake who was a master plumber. Robert’s father James not mentioned in earlier census is now back in the village. Aged 76 and described as a seeds man he is shown living in a cottage near the Six Bells with his second wife Mirah aged 57, who was born in Chelmsford Essex. Where they went after this date is unknown.

The 1881 cesus shows that Harry Nunn is now a builder and painter, has married Elizabeth Youngman a farmers daughter and they have a son Wilfred. Harry is soon to greatly expand his business and the census of 1891 shows he has taken over Jaggard and Sons who had been the main village builders at this time. He develops the land that would become known as Nunns Yard on which, as well as buildings for general building activities, there eventually was a blacksmith shop, a saw mill, an ironmongery shop and an undertakers. Harry and his family lived in Clematis Cottage at the entrance to Nunns Yard. The firm built most of the Martineau estate cottages and the Priory Room.

The 1891 census shows that Harry and Elizabeth have a second son named Frank. Tragically two daughters, Hilda Pearl and Violet Youngman Nunn had died in infancy. They were buried at the front of the Congregational Chapel. In the 1891 census Harry’s father Robert is living in Wattisfield Road with his second wife Sarah and their son Peter who is described as a traction engine driver. Robert and Sarah died within a few months of each other in 1898.

By 1901 Harry is employing many of Walsham’s men folk (photograph shows a group of men at Nunn’s Yard). The census of that year shows that son Frank is the clerk for his father’s business. Both the Nunn and the Youngman families were greatly involved in the Congregational Chapel, the Band of Hope, the Blue Ribbon Army, and the Temperance Society. Harry Nunn built a Temperance Hall on his land to save the good folk of Walsham from the demon drink. He ran a coffee shop, arranged annual Band of Hope outings to the seaside, formed a Children’s Sunday School, and founded a Temperance Band that played at many village functions.

The photograph shows Frank Nunn on the left with double bass. In the centre of the front row with trombone is Wilfred Nunn and behind his left shoulder with the grey beard is Harry Nunn. They were a very musical family. A newspaper report in 1899 states that at a Temperance Gala, Miss Clamp the organist was accompanied by Messrs H. Nunn, J. Finch, W. Stephens, and Master Frank Nunn on violins. Sadly Frank was to die of pneumonia in 1917.

By 1908 the Suffolk Directory shows that the forward looking Nunns had on top of their other activities, opened a grist mill, and sold agricultural and garden produce. They also sold Acetylene Gas and installed electric bells. In June 1924 Harry’s wife Elizabeth died. A service took -place at the Congregational Chapel where the Rev. T. Boyne commemorated the life and work of Mrs Nunn, the text being “who faith follows”. Tennyson’s Crossing the Bar was sung with great feeling. Harry died in October 1934 at the age of 82. The Bury Free Press reported: Amid many signs of deep respect and sympathy the funeral of Mr Harry Nunn took place in Walsham on Saturday afternoon. A service was held at the Congregational Chapel which was overflowing with mourners.

Miss Ruth Nunn niece, played the organ and the hymn “Lead Kindly Light” was sung. The Rev. G. Farmer concluded his address saying Harry Nunn is not dead. He is alive today in the presence of his God who he loved and served. There were many floral tributes including those from the Band of Hope, the Temperance Society, the Congregational Chapel, Mr & Mrs Maurice Martineau, Mr & Mrs Horace Clark, and from Mr Nunn’s employees.

Son Wilfred Youngman Nunn had married Maria (May) Griss whose family had shops in Hopton. They were to have eight children. Wife May died in October 1942, the Bury Free Press reporting “With regret the parishioners of Walsham learnt of the death of Mrs May Nunn wife of Wilfred Nunn of Holly House. She died suddenly on Friday at the age of 59. She was greatly esteemed and will be much missed. Ruth Nunn presided at the organ in the Congregational Chapel service that concluded with the hymn “Lead Kindly Light”. There were many mourners.”

In February 1972 the Bury Free Press reported that “Mr Wilfred Youngman Nunn died at his home Holly House aged 91”. Like his father Harry before him as well as business commitments he was always interested in parish affairs. A staunch Congregationalist he served on the Old Town Trust, Men’s Institute, the Town Farm Charity, Parish Council, and the Cemetery Committee. He was the first Special Constable in the village to be appointed serving in the period between the two wars. He was also a keen horticulturalist. There were many mourners at the service that took place in the Congregation Chapel. He was buried near the graves of his mother Elizabeth, brother Frank, and grandparents Thomas and Elizabeth Youngman. His eight children, Lawson Youngman, Pearl Violet, Wallace Frank, Ruby Hilda, Ida Elizabeth, Colin, Graham Griss, and Pauline Avarice Nunn all lived beyond their 70th year. Two of the family born in Walsham still live in the village, namely Dawn Warby, the daughter of Pearl, and Jill Scarfeof Graham Nunn.

As the reader will have read in the previous article much information can be sourced from the census, however this was not always so.

The first census in England was in 1801. It was conducted by either an Overseer of the Poor, a substantial land owner, or the local clergy.

It was very limited in information consisting of, name of householder, number of males, number of females, total employed in agriculture or other trades, total unemployed, how many families, total births marriages and deaths in the parish.

In 1821 age was asked to see if they were eligible for the army.

In later censuses the information became more detailed, it was not until 1841 that they began to be of use to the historian. Unfortunately they very seldom mentioned the name of a house only the road, leaving one to speculate where it was. Even at Walsham Hall the largest building in the village in 1841, the occupant was described as near Church Street. The census of 1871 asked the now seemingly cruel question, was anyone an idiot or an imbecile, this question was retained until 1911.

Most of the pre 1841 censuses were destroyed; there were only a few which survived.

Some of the information in our village census contains some interesting facts as follows.