A First for Suffolk 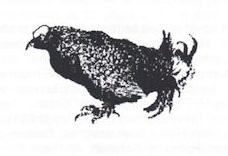 In 1498 a bird called a heathcock (hethkoc) was killed in Walsham. The manor court held on 18th September that year stated that: A certain outsider on the order and command of and abetted by Stephen Robhood entered this demesne and unlawfully took and killed a certain bird called a heathcock at High Hall Close and carried it off without the licence of the lord and his officers. Stephen was fined 1s.

The Oxford English Dictionary gives the 16th century as the first sighting of a heathcock or black grouse. Mark Cocker who wrote ‘Birds Britannica’ thinks it is a new record for the county.

It is possible that it was a case of mistaken identity but pheasants and partridges were not uncommon and should not have caused confusion. The black grouse is a bird of heath land so what was it doing on the heavy clay of High Hall? Could it have been an escaped caged bird?

In ‘Birds Britannica’ Mark Cocker lists the names of public houses with birds as their signs. There is just one called The Heathcock. It is in Llandaff, Cardiff.

The Firman Family of Walsham le Willlows and Beyond (continued)

Generation No. 3 – the children of James Firman and Mary Haddock

William James Firman may only have visited Walsham. When his parents lived there in 1871, he was a soldier at the New Military Barracks at Alverstoke, Hampshire. Ten years later he was married and living at Prince of Wales Wharf, Kensington, London, employed as a manager for a coal merchant. In 1891 he was living at 8, Carnarvon Road, South Mimms, Barnet, Middlesex with his wife Sophia (nee White) and his niece Florence A. White; his occupation was merchant’s clerk. They had moved to 30, Bellevue Road, Friern Barnet, Middlesex by 1901 and he was then employed as a commercial traveler in the coal trade.

My grandmother always said that they adpoted Florence A. White, but there is no evidence, and that she was an artist. In 1901 she was still with them and working as a photographic printer. She was certainly artistic, and I have in my possession a painting done by her done on glass, from a painting by Jan von Baas, which she gave “with Xmas wishes to uncle’s mother, 1900–1901”.

Henry George Firman, also known as Harry, was with his parents in Walsham in 1871 when he was a wheelwright apprentice, and, apparently, in 1881 when he was an unemployed coach body maker. However there is a possible duplicate entry for him in 1881, where Henry Firman, born in Suffolk, is shown at 36, Ifield Road, Brompton, Kensington, London, as a boarder and employed as a carpenter. This address was close to where his brother, William, was living at the same time.

Other circumstances persuade me that this could indeed be’my’ Henry. His brother, William married Sophia Steggel White in 1877. Her brother, Edward H. White, was a coachbuilder by profession, and in 1881 is recorded as an employer of 6 men and 1 apprentice. For me this co-incidence is too great, especially as by 1891 Harry Firman was employed as a coach body maker and living at 11 Banbury Street, Battersea, London, with his wife Eleanor and two year old daughter Eveline M. Firman. In the 1901 Census, Henry George Firman, coachbuilder, and his wife, Eleanor, (nee Ashman) were living at 32, Home Road, Battersea, London, with their one-month-old son, Harry. Their daughter, Eveline, can to be found with her grandparents, Richard and Rebecca Ashman, at Dove Stores, Bishop’s Lydeard, Taunton, Somerset.

Eva Harriet Firman was with her parents at Walsham in 1871, but by 1891 was living in the household of Evan Daines at 224, Edgeware Road, London, Middlesex, and employed as a draper’s assistant. There are family stories of her working as a nanny in Ireland, but nothing has been proved. I have not found her in the 1881 Census, which may support the idea. She did send home to her parents decorative alabaster fruit stands, which were damaged at Elmswell Station when the parcel was thrown from the train. It was the subject of a claim, as the incident was witnessd by the carrier who called to collect it, and to whom it was addressed – James Firman. I have the remains of the damaged stands. Eva died at Walsham on 19th June 1894 from cancer and other complications. She left some silver apostle spoons which were to be given to a female Firman child called Eva, and which were presented to my grandmother who was named after her.

Eldred was employed by his father and did not get control of the business until the latter’s death in 1912. He also served the community as a part-time fireman, and became the second officer. He was nicknamed Elly or Nelly. Eldred died on 10th September 1917 at his home at The Path, Walsham. As there was no male heir the carrier’s business was sold (to Jack Holden, who later sold it and emigrated to America).

The Mystery Person Florence Palmer appears at Walsham in the 1871 Census with James and Mary Firman; age 11 months, born Islington, Middlesex, nurse child. By 1881 she is said to be their daughter,

Florence Firman. It was common practice for a family to take in the illegitimate child of another family member, and I believe that this is what happened here. But whose child was Florence?

Her birth on 21st April 1870 at Islington Workhouse, Middlesex, was registered on 27th April 1870. She was named Florence Emily, and the mother was recorded as Louisa Firman of Stow Market, Suffolk. The workhouse matron admitted Louisa to the workhouse on 21st April 1870, in labour. Louisa was apparently from the Islington parish, occupation cook, religion Protestant. The Register of Births in the Workhouse confirms the birth on that date of a female child to Louisa Firman. Florence Emily was discharged after dinner on Monday, June 20th, 1870, aged 2 months, to the care of ‘grandmother’. Louisa was discharged at her own request, after breakfast on October 8th, 1870. On admission her age was shown as 22 years and, on departure as 23 years. If this is correct she must have had a birthday whilst there which would indicate that she was born in either the 2nd or 3rd quarter of 1847.

I have not been able to trace a Louisa Firman of a similar age to be the mother, except Louisa Firman, born about 1843 at Rattlesden, but I cannot connect her to my Firman family. One likely candidate seems to be Louisa Haddock who was in the household of her grandfather, James Haddock, at the time when Elizabeth Firman apparently visited Old Newton in1881 (see above). Louisa was 13 in 1861. It’s all guesswork unless someone somewhere has some information.

Florence Emily’s first child was born in the March quarter 1894 in Islington. She married his father, Hugh Andrew Marshall, at Islington Register Office on 13th July 1895. They can be found on the 1901 Census at 41. Rushton Street, Shoreditch, London. They emigrated to Australia in 1910, by which time they had six children. Florence died at Annandale, NSW, Australia, on 13th July 1933. Her death certificate states the names of her parents: Henry Firman, carrier, and Louisa Ashman.

I cannot reconcile my known Henry Firman with being her father and he was not a carrier; whilst there is a known link between Henry Firman and the Ashman family, I have not traced a Louisa Ashman. Henry would have been about 14 years of age in 1870, and surely would not have met any member of the Ashman family (from Somerset). There seem to be various elements of the Firman history mixed together at this point. I should be grateful for any constructive ideas to help to solve the problem.

Generation No. 4 – the children of Eldred Frederick Firman and Susan Ray

Cyril Eldred William Firman was born at Walsham on 23rd November 1893. Private C. Firman, 8641, 2nd Suffolk Regiment, was killed in action in France on 29th August 1914 at Le Cateau, just two weeks after his arrival in the country. He has no known grave; his name appears on the memorial at La Ferte-sous-Jouarre and on the War Memorial at Walsham. I have his “death penny” medal in my display cabinet.

Eva Olive Irene Firman, born at Walsham on 27th August 1899, was my paternal grandmother, and the last of my Firman family to leave the village. She was, according to things she told me, a mischievious child. She told, for example, a tale of turning on the tap on the paraffin seller’s cart and running off. On 25th December 1919 she married (Percy) Conn Hawes, son of Samuel Hawes, landlord of the Swan, at St. Mary’s Church, Walsham. She claimed that her wedding was the first occassion on which motorcars had been used in Walsham as transport for a wedding party. They lived for some time at Bottle Hall, Cranmer Green, and moved to Norton Green in about 1928. They were perhaps best known as landlords of the Thurlow Arms public house, Great Ashfield, between 1943 and 1956. They moved to Wookey in Somerset, and my grandfather died in Bristol in 1968. My grandmother ended her days on the Isle of Wight, and passed away on 22nd July 1995.

George, James and Eldred Firman worked as carriers in and around Walsham le Willows for some 90 years. For the most part their children left the district and did not return. They left little mark on the village, and today are largely unknown. To the best of my knowledge their graves are not marked. My grandmother told me how to locate her father’s grave but it has no distinguishing features. None of the three was born at Walsham, yet all chose to work and live there. I can understand that. I feel very much at home whenever I visit the village.

I must thank Phil Holford, grandson of Florence Emily Firman, for his contributions to her story; also Marjorie Firman, descendant of William Firman, the miller at Barking, Essex, and Sheila Lees, descendant of Haddock Firman and his daughter, Kate, for information they provided.

Bob can be contacted at Dearne View, 420 Darton Lane, Mapplewell, Barnsley, South Yorkshire, S75 6AL and would be pleased to receive any further information. e-mail: bob.hawes@lineone.net

An inquest was held in the Six Bells on the body of Margaret Wormer aged forty. Witness Edward Moor, an earthenware seller said,

‘I have lived with the deceased for ten or eleven years but we were not married. She had one child with me; a girl aged about four. The deceased had a part of four pints of beer at the Boar Inn but did not seem ‘fresh’. She told me to wait for her at the Cherry Tree Inn where I waited until nearly seven.’

Another witness was James Hayward who said,

‘I came into the Six Bells about 6 o’clock and was asked to go to the ten-pin ground and saw the deceased lying on the straw. I got a lantern and rolled her over. I could feel no pulse. She had been lying flat on her face with her hat ribbons plastered over her mouth from which froth was issuing. I got Dr. Short.’

‘the deceased had been dead a few hours. I made a post-mortem examination and found her body exceedingly well nourished but the heart was slightly fatty and the lungs and brain were much engorged with blood. I consider the cause of death was suffocation caused by lying on her face in an intoxicated state.’

‘An old, if not the oldest inhabitant of Walsham, has died at the age of ninety-five. Mrs. Hales, widow of Joseph Hales, resided at The Grove for thirty years many of which she was confined to the house. On her birthdays the village Temperance Band would play music on the lawn outside her window. She was buried at Somerton.’

‘Laurence Pearson Clamp, son of Mr. William Clamp a Walsham shopkeeper, has successfully passed the South Kensington Board Examination in theoretical chemistry. He was a pupil of the East Anglian School.’