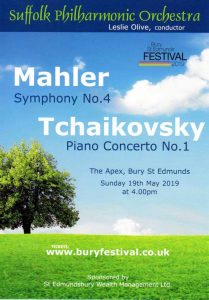 Tchaikovsky’s First Piano Concerto has one of the most famous of all openings, with its attention-demanding horn calls and its grand piano chords. Audiences have always loved it, and in due course, it became the first classical music to sell a million records.

The concert opens with the Fourth Symphony by the Austrian composer Gustav Mahler.  Mahler is famous for using huge orchestras and creating many of the triumphant effects later used by film composers.  But his Fourth Symphony is a cascade of melodies.  It begins with the sound of sleigh bells and ends with a child’s folk song-making it one of very few symphonies that use a solo singer.

Leslie Olive, founding conductor of Suffolk Philharmonic, has invited two truly gifted young soloists to take part in this concert.  The entrancing soprano Eliza Boom,  from the town of Whangarei in NewZealand, and the hugely talented young Chinese pianist Ke Ma, continue Suffolk Philharmonic’s policy of giving opportunities to the up-and-coming stars of the classical stage.