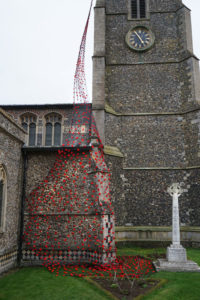 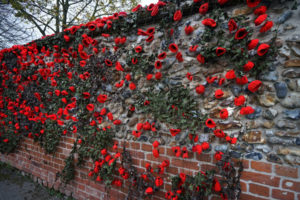 Jan Hall, who led the project with the village British Legion representative Fiona Glover, has been overwhelmed by the response to their appeal to local, talented crafters to make the profusion of poppies that have been knitted and crocheted by more than 75 individuals to mark Armistice Day and raise funds for the British Legion Poppy Appeal. 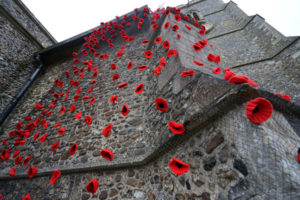 Jan said: “It has been amazing. I never imagined that so many people would get involved and it has really brought everyone together over the last year. A small group of us tied the poppies onto netting and hung it from the church tower after dark to give everyone a surprise on Sunday morning.

It’s the first time the church has been ‘yarn-bombed’ and we are grateful to the Vicar Philip Merry and the Church Council for allowing us to do it.” 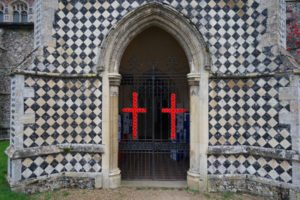 The poppies will adorn the church for the next two weeks leading up to the Remembrance weekend, which will also feature an evening of readings, ‘A Celebration of Letters’ written in times of conflict performed by Walsham Drama Group on Saturday 11 November at 7.30pm.

See the image gallery on the poppy project page for some larger images.