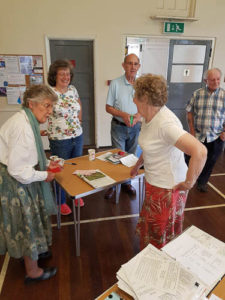 This year brought drought in May, a heatwave in June, and a torrential downpour just before, but despite this and several regular entrants being away, Walsham still put on a great Show with entry numbers higher than last year.  Very encouraging.

The Committee would like to thank everyone who entered, those who came on the day to view the display and all who worked so hard to make it a success, setting up the Hall the day before, assisting the judges, baking such delicious cakes and serving the teas, and for donating the many generous raffle prizes.

The Committee were delighted to welcome Sue Wooster from the Bellflower Nursery in Langham to present the cups.  Next year will be 150 years since the first Walsham Horticultural Show so we are hoping to make it a special one.

Pauline Batchelor won the Floral Cup, Hubby Frost won the Folkard Cup for Vegetables, and the Overall Show Trophy, plus the Fothergill’s Shield for best item in the Floral and Vegetable Classes for his box of mixed vegetables.

The highest number of points won Carol Hubbard the Domestic Class Cup and her wonderful Cherry Cake won her the W.I. Cup too.

The best photo was won by Moira Reeve; the Decorative Class Cup was won by Margaret Moore, and the Budding Rose cup for novice flower arranging was won by Diana Turner who also won the Novice Shield.

The Ray Freeborn Sunflower Cup was won by Carole Donaghy with an impressive 3.65m sunflower and the new Hanging Basket trophy was won by Tina and Trevor Pollard.