At 7.30 a.m. on July 1st 1916 orders were given to attack the German lines.
Among the British soldiers who climbed out of the trenches that morning was Private Archie Pollard from Walsham le Willows. He recalled that day:

‘I shall never forget that day, for it was a marvel how anyone could come through it all. I am very sorry to say we lost all our officers except one. I well remember that only two of us from my section got back and I was made a Lance Corporal. It was dreadful to see the dead and wounded men lying all over the place. I think the British Army alone had 60,000 casualties that day. The Germans’ trench was about 200 yards from us but it took until 1 o’clock to capture it. We crawled all the way with shells bursting all around us.’

Sergeant Hugh Clover was with Archie in the East Surrey Regiment. He was another Walsham man who went ‘over the top’ on that morning. His father was the miller at the windmill that was situated in Wattisfield Road. Hugh had been among the first to join up at a recruiting meeting in the Priory Room in August 1914. He was killed in action and became one of 19,000 British soldiers to die that day. Archie wrote to Hugh’s parents:

‘Dear Mr and Mrs Clover, I am sorry to inform you that your son met his death on the field on Saturday when we were advancing. We were so sorry to lose him for he was a very good non-commissioned officer. He did not suffer any pain and was buried as well as could be. He died a soldier’s death. I hope that you don’t mind me writing but I thought it my place to let you know.’

A further letter states that Archie helped to lay Hugh to rest. However in the next two years of war the exact place of the burial was lost. Hugh is remembered in name only on the Thiepval Memorial in France. 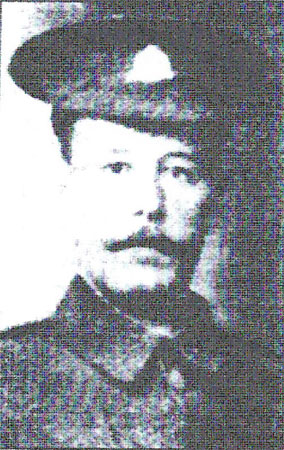 At daylight on the 2nd July 1916 the 7th Battalion of the Suffolk Regiment moved nearer the front line. They passed endless convoys of wounded returning from the first day of horrific fighting. At 3a.m. the following morning they attacked the enemy-held village of Ovillers. However progress in the dark was slow, allowing the Germans to fight back. The Suffolks lost heavily with nearly 500 casualties.  Among them was Herbert Bird. Herbert, aged 38, had been a farm worker who had also joined up at the first recruiting meeting in Walsham at the beginning of the war in 1914. He was initially buried near to the place where he fell, but after the war, in 1920, his body was exhumed and was laid to rest in the new Ovillers Military Cemetery situated in sight of the village.

The battles on the Somme took place along a front of some 15 miles. On July 20th the 2nd Battalion of the Suffolk Regiment were in the area called Delville Wood, aptly known as Devil’s Wood by the soldiers. There was much bitter fighting.  The Times newspaper reported:

‘It is now permissible to mention the gallantry of the Suffolks in the operation at Delville Wood where there has been the most desperate fighting. Two companies of the Suffolks seem to have sacrificed themselves under conditions that seemed impossible – but they held the wood.’

Among the heavy losses was Private Philip Finch, a farm labourer who lived in a cottage near Four Ashes Farm. He is remembered in name only on the Thiepval Monument.  In the first three weeks of fighting on the Somme, the village of Walsham lost three of its sons.

Archie Pollard saw plenty more action on the front line. He did come home to Walsham on leave once. He remembered:

‘Lice were a big problem in the trenches. They disappeared when I came home, but soon caught up with me when I returned.’

In February 1917 he was still on the Somme when a shell exploded nearby.

‘I was in the trench all night before being taken to casualty clearing station, where I waited a further two days before a doctor came and operated on me. I woke up in a lovely bed with a nurse sitting beside me. I had been injured just above the boot, but because gangrene had set in my leg was amputated above the knee. I was sent back to Netley hospital in England where the nurses and doctors were wonderful. In May 1917 I was fitted with an artificial leg.’

Archie returned to Walsham where he eventually became the village postman. He was given a specially modified bicycle. He died in 1972 aged 76.

Oswald Kerridge was born at a house in Four Ashes now known as “Foxglove Cottage”. He became a Walsham schoolmaster. When war was declared he gained a commission with the Durham Light Infantry, and was a successful officer. He died bravely in an attack on enemy lines at Bailiff’s Wood on the Somme in July 1916.

Edward Lee, a captain in the Hertfordshire Regiment, was the son of the Reverend Arthur Lee of West House, Walsham. He was the brother of Richard Lee who had been killed in action a year before in October l915. His commanding officer wrote:

‘He was a most capable officer and his gallantry has been an inspiration to us all.’

Thomas Clarke is shown in the 1911 census as a 17-year-old farm labourer living with his parents in The Street, Walsham. In November 1916, just days before the conclusion of that year’s Battles of the Somme, Thomas, of the 2nd Battalion Coldstream Guards, was killed in action. He was buried in the Guards cemetery at Lesboeufs in France.  Thomas was the last of the six soldiers from Walsham to die in the Somme battles of 1916.