From an article written by the late Bernard Pollard.

‘Walsham 80 years ago was very different from the place we know now. There were 10 shops and 5 pubs and people were able to buy all they wanted without leaving the village.

Christmas, unlike nowadays, was hardly thought about until a week or two before the actual day. Little was made of the festive season at school. The Infant School party in the Priory Room, organised by Mrs Martineau (Richard’s Grandmother) was always looked forward to. There was a big tree decorated with real candles, and a tea of sandwiches, cake, and jelly. This was followed by the pulling of crackers and the acceptance of gifts such as a crayoning book from Mrs Martineau.

The shops in the village did little decoration, but in the window of Clamps the grocers there was a mechanical figure of a Chinaman putting oranges into a bowl, that always fascinated us.

At home we made paper chains by gluing coloured strips of paper together. These were not put up until Christmas Eve.

On Christmas Eve we got very excited. We hung our stockings up and tried to keep awake to see Father Christmas, but never did. In the morning our stockings were full with some small toys, an orange, some nuts, and a piece of coal which was supposed to be lucky. One year, when I was older, I was thrilled to find an airgun and some pellets in my stocking. Children did not buy presents for their parents in these days but sometimes a daughter would sew something for her mother.

For Christmas Day the ladies of the church had made decorations of evergreens and flowers. The church was lit by oil lamps and heated by two coke boilers that the verger stoked up on Friday night until the Sunday. There were five services on the day with the first one being at 6am. so that the servants from the big houses could come to church before returning to prepare the day for their employers.

After church on Christmas Day our family somehow fitted onto father’s motorbike and sidecar, and set off to our grandparents at Ixworth Thorpe. A goose would be cooking on the coal–fired range. With dinner we always had a suet pudding and lots of vegetables, followed by Christmas pudding. At tea we had jelly, mince pies, and cake. The grown–ups ate separately in the back room and us kids in the front room.

After tea we set off in the freezing cold for home. Before we left, mother had put some bricks in the oven. The hot bricks were then wrapped in newspaper and put in our bed. We settled down tired and cosy on our feather mattresses.

These were very simple times but I look back at them with great fondness.’

Hugh Nunn has kindly sent us excerpts from letters by his mother, Rose, in order to “offer a small window on village life at the time”.

Rose Nunn (nee Sadler, born November 1905) came from Woolpit. Her father, like many others in the village, made and fired bricks for a living. Pay was poor, and with six children in their family, Harry and Ruth Sadler had a struggle to make ends meet. Ruth would take in laundry from better off families in order to earn a few extra pence. Woolpit School offered a basic education with most children leaving at 13, Rose loved reading and writing and these interests and skills never left her. More than anything, she saw that education opened doors for advancement in life. Sadly, only one avenue for employment was open to her in 1918. She went into domestic service which gave her little or no scope to develop her literary skills.

Ultimately, after a period of working for the son and grand daughters of General William Booth of the Salvation Army, she found employment as household cook at Dr. Poignand’s in Walsham le Willows. Her sister Joyce was appointed housekeeper.

Meanwhile Lawson Youngman, eldest son of Wilfrid and May Nunn of Walsham and grandson of Harry and Elizabeth Nunn, found himself occasionally employed by the doctor at the Beeches with carpentry and joinery tasks. One thing led to another and Lawson and Rose Sadler were married in 1935 at The Room (a Brethren Meeting House) at Woolpit.

Lawson and Rose were to have five offspring. In 1955 they started to leave the family home (‘Clematis’ High Street) for employment in Sudbury or National Service in the Royal Air Force. It was then that Rose’s talents as a letter writer came to the fore.

From 1955 to her death in 1970 a weekly flow of correspondence left Walsham for various destinations at home and abroad. All of her letters contained intimate details of family ‘goings on ’ and were placed within the context of Walsham village life. The 1950s and 60’s were times of immense change in rural life brought about by large reductions in the demand for farm labour. This was allied with the improving transport facilities which enabled village people to travel considerable distances to work.

Rose’s letters touch on matters of social and economic interest as well as something dear to every Englishman’s heart, the weather.

Report on Harvest Sale at the Congregational Church

‘I see you are still not able to get halfpenny stamps so am enclosing six. Don’t be so careless in stamping your letters and don’t keep throwing the ha’pennies away. If it really was 3d for a letter, I‘m sure you would complain.’

‘Alison said it was a wonderful Harvest Sale. Things made very good prices. That one pear made 3/6. And it was all over by just past 9. We didn’t buy anything this year. The Beales family, old and young, bought a lot of stuff so did Mary Clarke (Mrs Fred).’

The Infants’ School was still functioning and they had two boys in attendance with the same name!

‘Miss Hayward gave the baby’s class some letters and told them to lay them out in the right order in front of them to spell their own names. Whether she had ever told them how to spell their names or whether she wanted to find out how much they knew I don’t know. Simon, of course, laid out his letters to spell SIMON NUNN. By the time Miss Hayward came back to look at them the boy alongside who should have had his own name in front of him also had SIMON NUNN laid out in front of him.’ 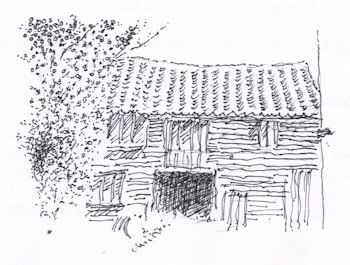 Nat Smith was Walsham’s last blacksmith latterly occupying the new ‘shop’ on the Badwell road. The Nunns had been village undertakers for well over 50 years and Lawson Nunn was an expert coffin maker. Coffins were made behind Clematis Cottage in the wooden building which can still be seen.

‘Lawson is busy, he made a coffin yesterday for Nat Smith who died in the West Suffolk Hospital. This morning they fetched him home and have taken him up to the ‘chapel of rest’. He was 73.’

Mr William buck (Billy) from Wattisfield was the local poultry and game dealer. He offered an invaluable service to village people in the area who had poultry or rabbits for sale. The cash so obtained could make all the difference to a family budget.

We had another sharp frost last night and today is bright and sunny.’

(More of Rose Nunn’s correspondence will be included in future reviews. Ed.)

The war was having a dreadful effect on the civilian population of Belgium.

The Bury Post dated 26/2/1915 reported that the Walsham le Willows Minstrel Troupe gave a patriotic concert in aid of the Belgian Relief Fund. A Belgian Day was to be arranged in the village to help all those suffering in the fighting.

It was also reported that a Public Meeting was held in the Institute with the object of forming a Volunteer Corps in the village. Captain Thoronton stated that in case of invasion it was the duty of every able bodied man to be prepared for such an event. About 30 attended the meeting plus 9 juniors. It was arranged that members had one drill a week in the Temperance Hall. An equipment fund was to be set up.

The Bury Free Post 12/3/1915 stated that the day proved very successful. Collectors wearing sashes in Belgian colours took their boxes round the village and made a grand total of £26–10–4.

It was also reported that the first drill meeting was successful. Instruction was given on the different parts of a rifle. The rifle was given to the Volunteers by the Vicar who received much applause. The total strength of the Corps was 48.