Walsham and the Great War

The Bury Post 3rd July 1914 brought news that the Archduke Franz Ferdinand, heir to the Austro–Hungarian throne, and his wife, had been assassinated in Sarajevo

Bury Free Press 25th ‘The Misses Nellie and Olive Ferridge of Walsham were successful in gaining honours in pianoforte and received certificates at Ipswich Town Hall. They were pupils of Miss Muriel Clamp of the same village.’

On 1st August, just three days before war broke out the Bury Post reported that Walsham le Willows cricket team played away to the team of Botesdale and Redgrave. Walsham scored 95 runs and then skittled out their opponents for 39. The team included Richard Lee and Oswald Kerridge who would be killed in the coming War.

ON AUGUST 4th BRITAIN DECLARED WAR ON GERMANY AFTER AN ULTIMATUM TO CEASE AGGRESSION IN BELGIUM WAS IGNORED.

On a wave of patriotism the men of Britain responded to the call to arms. The Bury Free Press proclaimed…

‘War is a shocking thing under any circumstances and it is terrible to think that in this age of civilisation such a state of things as now exists should be possible. But the dogs of war are let loose and we should all stand shoulder to shoulder and fight for what we believe to be honourable, true and just.’

Cyril Firman is shown in the 1911 Census as a farm labourer living with his parents in a cottage that stood where the entrance to ‘Clarkes of Walsham’ is today. He had joined the regular army and was stationed in Ireland when the declaration of war took place. On the 13th August Cyril, a member of the thousand–strong 2nd Suffolk Regiment, set off for Le Havre on two old tramp steamers. In France they joined up with thousands of other soldiers and boarded trains to take them towards the Belgium border. They alighted at the French town of Le Cateau and then marched eastwards. It was hot summer weather and the countryside looked green and bountiful. In the villages they were greeted like heroes and given food, wine, and cigarettes. They sang as they marched believing that they ‘would be home by Christmas after giving the Hun a bloody good nose.’

On the 22nd August British soldiers crossed the Mons–Conde Canal and many laid down to rest in the town square. The next day, Sunday, the church bells rang. News came of the approach of tens of thousands of German troops. It was this day that the first deaths of the war occurred, including some in Cyril Firman’s Suffolk Regiment.

The Germans advanced rapidly and with the backing of massive artillery treatened to surround the British. A decision was made to retreat back over the French border. They retraced their steps down the same long road towards Le Cateau. They were accompanied by civilians fleeing from their villages.

That night in a field near Le Cateau the 2nd Battalion flung themselves down exhausted. The weather was hot, they had had little sleep, and their feet were swollen, blistered, and bleeding from the new boots they had been issued with before leaving England. A Report mentions…

‘the Suffolks in particular, who lay to the west of the town, were badly placed for general action.’

The next morning the Suffolks took up a line in a stubble field where some corn stooks were standing. The enemy advanced with a deafening storm of high–explosive shells. German aircraft circled overhead, directing their artillery by dropping different coloured smoke bombs. Many of the Suffolks’ machine guns ran out of ammunition. After nine hours of incessant bombardment the remnants of the regiment withdrew.

This day, the 26th August 1914, Corporal CYRIL FIRMAN became the first of Walsham’s soldiers to die in the First World War.

The German soldiers were also exhausted and had lost many men in the fighting. It had been the German plan to move into France and take Paris within six weeks. The actions of the British at Le Cateau that day prevented this from ever happening.

Almost a year had passed before Mr and Mrs Eldred Firman received official notification of their son’s death. He was 22 years old. He is commemorated on the La Ferte–sous–Jouarre Memorial in France. His photograph is shown below.

Although aged 44 Frederick was one of the first in the village to be called up as he was in the Naval Reserve. He joined H.M.S. Aboukir as Chief Stoker. Along with sister ships H.M.S. Hogue and H.M.S. Cressy, the armoured cruiser was sent to defend the Belgium seaports. At dawn on the misty morning of September 22nd 1914, the German submarine U7-9 attacked. H.M.S. Aboukir was the first to be hit by one torpedo, sinking rapidly. The other two ships, thinking that a mine had been hit, sailed in to help the stricken sailors but were themselves torpedoed. In all over 1,450 men from the three ships were lost. 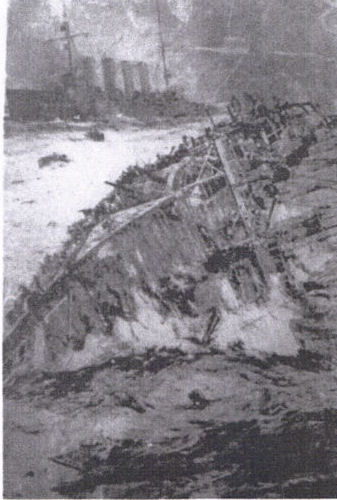 ‘Great anxiety is being experienced by the relatives of Frederick Sharman who is believed to have been on the British ship ‘Aboukir‘ that was blown up on Tuesday morning. No tidings have yet been received by his wife.’

His wife, Elizabeth Anne Sharman, and his parents James and Elizabeth Sharman who lived in Wattisfield Road, were soon to learn that Frederick had gone down with his ship. Wife Elizabeth continued to live in the village until she died in 1953 aged 83. Frederick is commemorated on the Chatham Naval Memorial. Below is an artist’s impression of the sinking of H.M.S. Aboukir.