What the Papers Said: 100 Years Ago

In January 1914 several Christmas and New Year entertainments took place in Walsham, as indeed they had in previous years. Everyone was unaware that this year would be the last of such festivities for some time. War was imminent.

The Bury Free Press reported that…

Also in January the children of the Congregational Chapel Sunday School were given their annual treat in the Temperance Hall. After tea a lantern show was provided and every scholar received a cracker that contained two new halfpennies and a box of sweets.

In the Priory Room the Rev. A.C. Briggs entertained the Church Choir , 20 in number. The excellent food provided by Mr. Kenny was soon demolished. Later the youngsters played games and went home with an orange and some chocolate.’

At the end of the month the village Black and White Minstrel Troupe gave their first concert. The Bury Free Press reported that…

‘…a packed audience in the Temperance Hall heard songs such as ‘Marching through Georgia’ and ‘Massa‘ in the cold, cold ground.’

Mr. W. Nunn amused the crowd with a curious caricature of a banjo.’

Three funerals were reported in this quarter of the year, being those of Mr. William Bird, who was 87 years old, Mrs. Emma Hubbard of Fish Ponds Farm and Mr. Thomas Durrant who was in his 90th year. He died at his son–in–law’s residence at Cranmer Green and was…

‘…among the first in the village to receive an old age pension. Until recently he walked a mile to the Post Office to collect it, and a mile home again.’

‘In Walsham le Willows, after heavy rain, the somewhat unusual phenomenon know as a ‘Hobby Lantern’ or ‘Will–o’–The –Wisp’ was witnessed by some inhabitants on the Coach Road meadow.’

Coach Road is now The Avenue.  Will–o’–The –Wisp is a name given to mysterious lights seen in boggy ground or churchyards and often thought to be omens of tragedy and death. More mundanely it is believed to be caused by the igniting of methane gasses formed by rotting vegetation below ground.

Many village functions were held at the Temperance Hall. The hall was built in 1902 by Harry Nunn on land the he owned. He was a staunch member of the Temperance Society and the Congregational Chapel. It remained the main meeting place until the Memorial Hall was built in the 1950‘. The photo of the Temperance Band was taken outside the hall in 1906. Left to Right: Frank Nunn – double bass, Leonard Finch – piccolo, Arthur Landymore – bombardon, Arthur Death – tenor horn, Frank More – tenor horn, Harry Cocksedge – bass, John Finch – – clarinet, Wilfred Nunn – trombone, Harry Nunn with beard, Frank Sayers – cornet, Harry Finch – baritone, Harry Hubbard – cornet, Bill Smith – cornet, Herman Lord – baritone, Phillip Finch – side drum and Oscar Frost – bass drum.

It was said that on a band outing, Harry Cocksedge gained fame by walking round the parapet of Lavenham church tower. Some ten years after this photo was taken Leonard Finch and Phillip Finch were killed in action on the battlefields of France. Leonard Finch has his name on the memorial at Cambrai. He was the son of John Finch and the brother of Harry Finch, also in the photo. Phillip Finch ’s name is on the Thiepval Memorial on the Somme. He was a cousin of Leonard Finch.

This rubbing is from the only remaining floor brass in St Mary’s, Walsham. It can be seen in the south aisle, and shows the arms of Robert Smallpece. Next to it is a Latin poem in memory of his wife, Thomasina, buried in the grave below. She died in 1603 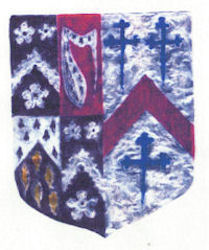 We know little of Thomasina Smallpece, or to give the familiar form, ‘Thomsin’. The parish register, now in Suffolk Record Office, merely mentions Thomsin‘s burial in St Mary’s on 30th January. She clearly belonged to the gentry. Her husband‘s shield shows, to our left, (wearer‘s right) the arms of the Smallpece family, and to our right, Shardelow, her father’s family. Husband to our left, wife to our right was usual in heraldry. The name Thomasina, more popular then than now, was derived from her father‘s Christian name. At that time, to the bewilderment of Hilary Mantel readers, ’Thomas’ was favoured by many Tudor families, such as Cavendish, Cranmer, Cromwell, Gresham, Howard, More, Tallis, Wolsey, to name but a few.

The Latin inscription, carefully transcribed, is as follows:

Further comment: Line 1 states the year as 1602, but in those days the new year began on 25th March, Lady Day, or the annunciation, 9 months before Christmas Day. In our reckoning, that particular 28th January (line 4) was in 1603, Modern historians would render the date in question as: ‘28th January 1602/3’.

The phrase ‘DONEC SCRIBEBAT’: ‘as he had written’ (line 2) refers to a divine plan, ‘he’ being God. Many believed that everything was foreordained, as, for example, in St Paul’s letter to the Romans chapter 8 verses 28–30.

1603 (our reckoning) was the 45th year (line 3) of Elizabeth’s reign, and in fact her last. She died only a few weeks after our Thomasina. The Latin verse was presumably composed in February/early March, for it makes no reference to the death of the great queen on 24th March, (incidentally the last day of the old year) an event which was seen as nationally momentous. The name ELIZA/BETHA was divided to fit the scansion of the Latin hexameters. ‘CONVIVXQ~’ is the engraver’s mistake for ‘CONIVNXQ~Rsquo;: ‘wife also’. Throughout my transcription the ‘~rsquo; denotes an abbreviation in the original. In line 5 it is ‘CONIVNXQUE’. In lines 2 and 3 it stands for a final ‘M’, as was customary, though the Latin is unusual.