At the Suffolk Record Office a batch of hand-written papers contain the day-to-day expenses of the Walsham parish constables during the 18thcentury. 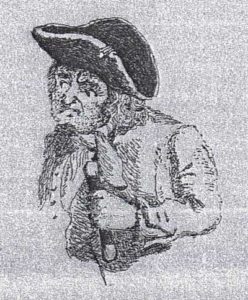 The term ‘constable’ is ancient, and originally meant ‘Count of the Stable’, a position of great responsibility. The Constable of France, for example, saw to the management of the whole country, and was notably in charge of the French army at Agincourt. Like many other French aristocrats, he died in the battle, and was celebrated in the accounts of chivalry. Ordinary constables, however, such as those at Walsham, were much lower in the pecking order. Even after the medieval period they still had some association with horses, for they transported prisoners for trial to local courts such as Ixworth or Bury. A typical example is this expense account from 1710:

Although parish constables (usually two) were elected for a year at the Easter vestry meeting, it was not a church appointment like a churchwarden’s. Churchwardens were, and still are, responsible to the parish, whereas constables were governed by the jurors of the leet court. a pre–Conquest judicial system based on county divisions. It was not a popular appointment. The duties were bound to cause difficulties with neighbours, for a constable was necessarily resident in the parish. In Shakespeare’s ‘Measure for Measure’ (c. 1604) a character says that he has been constable seven yeare and a half. Admittedly this is a fictional case, played for laughs, but in 18th century Walsham several men took on the post for more than a year. Maybe the perks were worth it, or maybe the men had a strong sense of public duty and liked the prestige. The badge of office was a simple wooden stave. A picture by Hogarth, Southwark Fair, 1734, shows a London constable, grasping his short stave, about to make an arrest.

As can be seen from the cost, the painting was a specialised process, and surviving constables’ staves from other parts of the county have very intricate designs painted on them.

Often a Walsham constable’s bill refers to a presentment (spelled variously even on the same page). This term could refer to a variety of documents supplying information to a local authority. It could, for example, be a list of men liable for militia duty doubtless, as with Falstaff, there were a good many ‘backhanders’ for exemption involved here), or a list of householders required, after 1695, to pay window tax. In some instances the constable was illiterate, and had to pay someone to write his presentment. In 1711 an unnamed constable…

‘peyed to Mr Complin (who lived at The Beeches) 1 shilling and 6 pence for presntments for the Sesions and sizes.’

Both terms, Sesions (Sessions) and sizes (Assizes), are derived from verbs meaning ‘to sit’, and judges sat delivering judgement. Assize cases, to which constables had to transport criminals, were held in major towns, and could result in capital punishment. Lesser cases often concluded with corporal punishment, and at Walsham there are fairly frequent instances of whipin administered by the constable. Although Mr Complin had to be called in to act as scribe for an illiterate constable, a surprising number of Walsham constables were able to write, after a fashion. Our team of researchers found great difficulty in deciphering the expense accounts written by Nat Plumpton the village blacksmith who was constable in 1718. His almost illegible bills feature frequently in expense accounts sent to the churchwardens. His metal handiwork is remembered every week, for the noisy latch of St Mary’s north door was made by him.

A duty more positive than punishment was the succouring of poor travellers or passingers. People such as these were a drain on the Walsham finances, and it was in the parish interest to move these passingers on to the next village. Also in this game of ‘pass the parcel’ were sailors discharged from their ships at the end of a voyage, or even shipwreck victims. In 1717 four shillings and sixpence was paid to successive groups of seamen. In the following year Nat Plumpton paid out 2s. 00d. for roloring (relieving?) 2 seamen & loging them at the bore. In Walsham The Blewbore, as it was known, did a good trade throughout the century, for the constables usually took passingers to spend the night there. In 1719 a Role and Chese could be had at the Boor for a peney.

A team of History Group researchers laboured over these fascinating, often amusing, documents for many months. The full transcription entitled “Bills and Receipts of the Parish Constables of Walsham le Willows 1708-821” is available on the list of History Group publications.

‘The inhabitants of a cottage in West Street, the property of Mr. Jaggard, were awakened very early by an outbreak of fire. A wooden beam running through the chimney, which had evidently been smouldering for some time, ignited. A few minutes later the staircase would have caught fire thus cutting off escape. Help came from the nearby farm occupied by Mr. Raynor and the flames were extinguished. This is the third fire in the village recently caused by chimney beams.’

‘Owing to the amount of influenza and sickness in the village all the schools have been closed. Many adults have also been afflicted.’

‘A debate on women’s suffrage was held in the village. A vote on there being immediate enfranchisement of women was carried, after the word ‘immediate’ was removed.’

‘At the Church service on Sunday special mention was made to the foundering of The Titanic.’

‘The sale took place of The Limes, the brick and slate residence in the High Street. It has five bedrooms, a box and bathroom, a dining, drawing, and morning room, two kitchens, storeroom, a cellar, and coal house. Also it has a butcher’s shop occupied for many years by Mr. Cawston. Also included are stables, a harness room, two loose boxes, a slaughter house, piggery, chaise house, and am egg store room. In the walled garden there is a large greenhouse and two pumps. After several bids it was knocked down to Mr. Aldridge for £450.’

‘A very severe thunderstorm passed over the village accompanied by heavy rain and hail. In the afternoon the lightning struck a chimney at the farmhouse occupied by Mr. Westley Davey, damaging the roof and knocking the fireplace out in the room below. A mirror was also cracked but fortunately the occupants were uninjured.’

‘Mr. Harry Finch of Walsham is to sail to Australia on the SS Otway to Melbourne with his wife and family. He worked as a blacksmith and wheelwright.’