From Walsham-le-Willows to Bury Gaol

The 1840’s was a time of abject poverty in England, especially in the depressed agricultural areas such as Suffolk. The decade was known as the “hungry forties,” a time when many families were dependant on the parish to help them survive their desperate plight. Many who could not manage on the sometimes meagre help had to enter the Workhouse in order to survive. Here, although the conditions were Spartan, at least they would be fed and children would receive some education.

There was much frustration amongst the poor working class, some of whom vented their feelings by stealing from, or damaging the property of, wealthier parishioners. The wealthier also felt aggrieved that their taxes and contributions were going to the criminally ungrateful. Most villages had one or more policemen who lived in the community and kept an eye on the ‘ne er-do-wells.’ They were not well paid and often relied on rewards given by the victims of crime when a perpetrator was apprehended. Most crimes would now be deemed as minor misdemeanours but the ‘zero tolerance’ attitude was thought necessary to prevent anarchy.

An arrested suspect would be taken to the gaol in Bury St Edmunds to await trial either by magistrate in Petty Sessions or, for serious cases, at the Assizes. Arriving at the gaol the prisoner’s details were entered in a ‘Receiving Book.’ Age, height, complexion, shape of visage, hair colour, eye colour (always brown or grey, never blue), and appearance, whether clean or dirty, was written down. Also previous convictions were noted and whether the prisoner was lame or ruptured.

Dating from 1844 some of these Receiving Books still survive in the archive of the Bury Record Office and the following are entries relating to those taken to gaol, probably in a horse-drawn police wagon, from Walsham le Willows.

Aged 19. A labourer. Height 5ft. 6in. Light complexion. Brown hair. Grey eyes. Visage round. Has mole spot on back. Can read and write learnt in this gaol during previous convictions. Father is James Weavers a Walsham labourer. Charged with having feloniously stolen, and carted away, 14d. in copper and one pound of pork valued at 5d. the property of James Woods of Walsham. Previous convictions were: 1) Damaging a quantity of worsted – 14 days prison. 2) Stealing turnips – 10 days. 3) An assault – 6 weeks gaol. 4) Wilfully damaging an apple tree – 6 months. 5) Stealing apples – 3 months. 6) Damaging a fir tree – 14 days. 7) An assault – 1 month gaol. It was noted that the prisoner’s character and habit were ‘very bad.’

This time he was acquitted.

[t was not uncommon for an alias to be used, as here with Weavers-Sharman. It sometimes meant that a remarried or unmarried woman had children with a different surname.]

Aged 32. 5ft. 9in. Light complexion. Brown hair. Grey eyes. Round visage. Cannot read or write. Married with 6 children between 4 months and 13 years. Father is Richard Woods who died in Walsham. Charged with an assault on his wife in Walsham. Sentenced to 7 days in prison.

Previously convicted for misbehaving in the Union. [i.e. Workhouse]

[He had married his second wife Mary Chambers in 1837.]

Age 15. Ruddy complexion. Ruddy hair. Grey eyes. Round visage. Father is labourer Francis Palmer. Charged with unlawfully and wilfully setting fire to a quantity of bean and wheat straw in Walsham the property of James Baker.

He had no previous convictions and was discharged.

Aged 16. Sister of Abraham, above. Same offence and also discharged.

[The census of 1841 shows them living with their parents in Clay Street in Walsham next door to James Baker, the victim of the alleged offence.]

Charged with having wilfully and maliciously set fire to a quantity of straw in the loft of a farm stable the property of John Miller Esq. Sent to the Assizes. [Sentence unknown.]

Charged with refusing to perform orders of bastardy of £1/5/4. [i.e. not paying upkeep to a mother who claimed that Samuel was the father of her child.] Sentenced to 1 month in prison.

Sentenced to 14 days in prison and a fine of 3d. Previous convictions one for poaching and one for assault.

Age 20. Charged and sentenced as Bartholomew Clarke, above. Has been in custody eight times before. [see January 1844.]

As November 1844 – Again refusing to pay an order of bastardy.

Charged with stealing a small quantity of carrots from Wlliam Derby. Sentenced to 1 month in prison.

Charged with having set fire to a barn, stables and other buildings, the property of farmer Mr. Richard Gapp. [Cranmer Green.] He was sent for trial at he Suffolk Assizes.

At the trial Robert Dew showed no remorse. “There’s old Gapp who might employ 5 or 6 more on his farm but the old scoundrel has suffered for it as he has had two fires. It was the most beautiful blaze I ever saw.”

He was transported for life, being sent on a convict ship to Norfolk Island in Australia and then to Van Dieman’s Land where he was to die, aged 70, in the Tasmanian capital of Hobart.

When arrested Robert Dew was reported as saying “Others have done fires as well, why don’t you arrest them?” Indeed there had been other fires as a report in the Bury Post dated October 9th 1844 shows: ‘At midnight a fire broke out at the premises of Mr. Hatton of Walsham le Willows [Cranmer Green, probably Sunnyside farm.] A large barn containing beans, peas, wheat, and barley was destroyed and a stable with a wagon and harnesses. In other outbuildings pigs and poultry perished. The Walsham fire engine was quickly on the spot and labourers assembled to lend their assistance, but there was a great deal of apparent carelessness and apathy among those present. The numerous fires in Walsham-le-Willows are disgraceful and inexplicable.’ 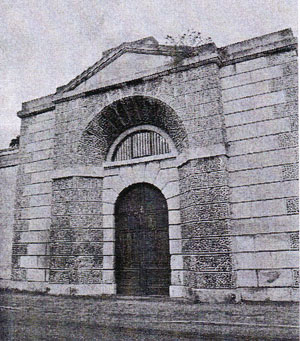 ‘In no parish in the county are the poor more cared for. There are few out of work and wages are better than for some years. There are allotments, clothing clubs, savings clubs, as well as medical and benefit clubs. Twenty poor women are furnished with a new gown each year and eight poor men with greatcoats. Coal is supplied at a reduced price and poor children can receive an education.

There is an established church, and Baptist, Independant, and Primitve Baptist meetings take place in the parish. The Wesleyan Methodists are numerous and their preachers so popular that a larger building, a handsome edifice, is now being erected.. Yet wth all these advantages the parish is disgraced with incendiary fires.’

‘To what cause can we attribute this diabolical spirit? This is the fifth time the demon of fire has lighted his torch in this village, affrighting the inhabitants and destroying in their minds all the good intentions towards poorer neighbours. Mr. Hatton employs plenty on his well cultivated farm and is always ready to advance money to the poor unable to pay their bills and rents, and yet his premises have been fired. Mr. Miller the brewer of this place has twice had attempts on his premises.’

‘What then, we ask, does all this incendiarism mean? We hope for the honour and credit of this parish that it is strangers setting the fires, but why should they? If it be the poor of this parish then all we can say is that it is the most ungrateful conduct, it is unmanly, it is cowardly, and it is inhuman and murderous because living animals are destroyed and human lives put in jeopardy.’