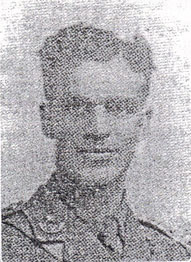 Oswald Alfred Kerridge was born in 1891 in a house called ‘Laurels’ now ‘Foxglove Cottage’ at the Four Ashes. His father William was a solicitor’s clerk and later became a registrar of births, deaths and marriages. Oswald became an assistant master at the Boy’s School in Walsham. In September 1913 the Bury Free Press reported an effort to improve his standing. “Mr O. Kerridge is leaving the village to study at Goldsmith’s College in London. His genial and enthusiastic support and work as secretary of the cricket club and captain of the football club has made him many friends and his wholehearted work in arranging matches will be much missed.”

The following year the First World War broke out. He received a commission in the Durham Light Infantry and in 1916 he found himself on the Somme battlefields. On July 9th of that year the Durhams received orders to attack a German stronghold called Bailiff’s Wood. A report says that “the enemy put up an intense barrage of machine gun and rifle fire and 2nd lieutenant Kerridge in the leading company was hit. He was got in as soon as darkness permitted and taken to the dressing station.” From there he was taken on a long journey, perhaps 80 miles, to a hospital in the Normandy City of Rouen. Two weeks later he died.

The Captain of his regiment wrote that “it had been a great blow as it was hoped that Oswald would soon be back with them. His abilities in map reading and his hard work and keeness were recognised by all. Had he lived he would have received the Military Cross for his gallant work.”

During the First World War camps and hospitals were set up on the Southern outskirts of Rouen. There was a supply depot, part of the General Headquarters, a convalescent depot, the Red Cross, field hospitals, and eight general hospitals. The majority of the dead from these hospitals were buried in the cemetery of Saint Sever, which because of the numbers, had to be greatly extended. Many died of infection rather than the original injury as may well have been the case with Oswald. Some of the later burials were undoubtedly those victims of the 1918 flu pandemic.

The motorway trip to find the grave was far less arduous than that taken by Oswald in 1916, although an earlir attempt to locate the cemetery had failed. Trying to follow old maps of Rouen on the new city ring roads is not easy. However this time with the help of some impressive gesticulation by a local, the cemetery of St Sever was found. Next to it is a large football stadium which surely the sporting Oswald would have approved of.

It is partly municipal with many grand family vaults and there are graves of French soldiers from the First World War including some from the North African territories. There are 328 graves of soldiers from the Second World War when the hospitals of Rouen were onse again used for casualties. Walking on through the beautifully kept burial grounds and passing a white stone memorial the extended part of the cemetery is reached. Here there are 8,346 graves of British and Commonwealth soldiers from the Great War.

Shortly after this date his parents at Four Ashes received a telegram. “The King and Queen deeply regret the loss you and the army has sustained by the death of your son in the service of his country, Their Majesties truly sympathise with you in your sorrow”.

‘By the kindness of Mr and Mrs Sullivan, the boys of Walsham-le-Willows Industrial School were entertained at the Suffolk Hotel, Bury on Friday afternoon.  Nothing had been spared by the host and hostess to make the day a memorable one in the lives of the youngsters, and loud cheers were given to the donors of the feast at the conclusion. The boys, 45 in all, were conveyed from Walsham by Mr Hodden. Mr E. Porter, the Superintendant of the school, having charge of a happy cargo. Everything possible was done to make the boys feel thoroughly at home. An impromptu musical programme was arranged and to this Mr H. Jarman contributed several songs with his customary spirit and bon homie. He had a great reception.’ 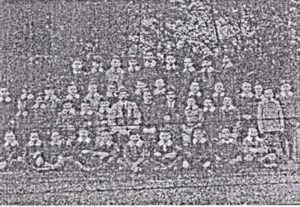 ‘Mr J.A. McLaren also gave a couple of humerous items. Some of the boys volunteered to sing and displayed remarkable talent in up to date and popular numbers, one little fellow perched upon a music stool entertaining the company with “I wish I were single again’.

‘Mr Porter was good enough to give the Bury Free Post representative a short account of the scope and activities of the school which is administered by the Home Office and the Church of England Waifs and Strays Society.’

‘It is a remarkable thing’ he said ‘to find so much apathy amongst our neighbours and the public generally. It is true that the school is in an inaccessible spot but even then, nobody seems to take the slightest interest in our doings. It was only by the greatest accident – a very fortunate one by the way – that I met Mr and Mrs Sullivan. They were greatly interested in what I told them of the school, and at once extended an invitation to the lads to come to tea. Perhaps now that the ice is broken other kindly disposed people may think sometimes of us.’

‘There are 45 boys at present at the Walsham le Willows school and they are a real good lot of youngsters. I came from Stamford Bridge Staffordshire to take charge and have had 16 years experience in similar work, therefore when I say the boys are a good lot, I mean it. Their tuition is mainly agricultural. We have a farm of 200 acres. Besides this they are taught house and garden work, and after their education is completed they are found berths in farm services or gentlemen’s houses. The lost careful enquiries are made by me before the boys are sent out to these situations. No lad is permitted to his home until we are convinced it would be to his advantage to go back, and in this connection the police in the district in which the home is situated co-operate with us in making enquiries. Sixteen is the age. It is an interesting fact during the Great War 25 old boys of the Walsham School have been killed in action or died from their wounds.’