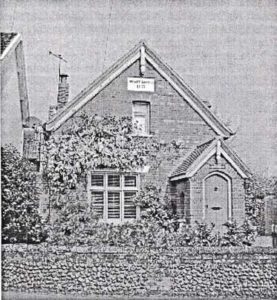 The school opened in January 1872 with Miss Caroline Howe as headmistress. The site and the building were financed by the Martineau family, with Mrs Lucy Martineau (1803-1887) and her daughters making it their particular project. Mrs Martineau was the mother of John Martineau (1834-1910) then owner of The Lawn and its extensive estate. There was an infant school in the village before 1872. It had been endowed by “Captain Wilkinson” (presumably Captain George Wilkinson of Walsham Hall) as part of the Girls’ School. (1868 Morris Directory & Gazeteer)

The Infants’ School log book was kept by the headmistress and details of school life were entered each week, including lesson plans and attendance figures.

The register was checked regularly by the “Correspondent”, Miss Mary Constance Martineau. She was Lucy Martineau’s eldest daughter (1830-1917), and John Martineau’s older sister. I called over the registers andfound them quite correct” appears repeatedly as Miss Martineau visited the school most days, hearing tables and reading. Also in her writing are the copies of the annual inspector’s reports.

In July 1872 there is the first inspector’s report which states that “the school is improving but that the marching is at present too rapid and too noisy.” The report and the attendance figures had to be good in order to qualify for a grant from the School Board, as local education authorities were originally called. The 18th century Elementary Education Act introduced the system of support for voluntary as well as local authority schools, but it was not until 1880 that elementary education became compulsory.

On September 10th 1872 the school re-opened after the month’s Harvest Holiday. (It is interesting to remember our academic year Sept. – July is rooted in the necessity for all possible labour in August.) That first September saw the highest possible attendance – 80 small children. The population of the village was approx. 1300. The building had been planned for 60 children. But the attendance fluctuated drastically. The bigger boys were frequently away for bird-scaring and for seasonal help like seed-sowing in February.

There was much illness among the little children – the diseases of childhood which have almost disappeared today – whooping cough, diphtheria, scarlatina, measles. The average attendance for the year in 1873 was 54.

The inspector’s reports for the next two years – 1873, 1874 – are good, praising the instruction ans discipline, with some worries about the “large baby class” and the inadequacy of the monitor Anna Banyard. She left in July having failed her exams. The examination took place annually in Bury.

In 1875 the log book contains a complete list of pupils with many familiar names e.g. Nunn, Pollard, Frost-59 names in all. In 1876 the inspector’s report became very critical of the conditions and overcrowding: “23 children over seven with no desks” – “a great deal of talking and noise” – “payment to be withheld because of defective discipline”, surely not a helpful way to improve a school. In the following year the report is much more favourable and the average attendance reached 60.

During 1878 and 79 there are several very miserable entries. A pupil-teacher called Emma Wells died- “it is with deep pain I make this entry.” There was a winter epidemic of scarlet fever and a summerepidemic of measles with as many as 35 children absent. Two little girles, Eliza Loker and Alice Blake, died of diphtheria. Another recurring theme is diabolical weather, also very damaging to the attendance records. “Heavy snow and drifting” in January 1881 meant the school could not open. The village street flooded frequently. “Many children absent with chilblained feet.” Looking forward through all the years to 1916, the village was rarely free from epidemics: whooping cough in the winter could cut attendance by half. By 1893 influenza occurred regularly each spring, culminating in February 1912 in such a severe epidemic that the school was closed for a month. A couple of months before, the headmistress had recorded that the temperature was 35 degrees Fahrenheit in the schoolroom first thing in the morning, rising to 41 degrees at noon and that “many children were crying with the cold.” It seems unfair for an inspector to report that “the children showed a certain want of life and intelligence in oral questioning”.

In 1879 Miss Jane Chasteney became headmistress and most of the rest of the log book is in her handwriting: spiky but clear copperplate. There are four breaks: one in 1893 when a Miss Elderidge was appointed. She quickly “went away”. to be followed by Miss Alice Wenfritz who disappeared with “family trouble”. In 1897 Miss Esther Howe was appointed who lasted about two months. The fourth break was in 1900 when a Miss Paul was appointed. She resigned in 1903 “to regain her health”, and back came Miss Chasteney. Perhaps Miss Chasteney was firmly settled in the village and a safe pair of hands during staffing problems. She finally retired in 1915 and received a gift cheque for £13.13s.0d. marking26 years service.

The other faithful supporter was the eldest Miss Martineau, Mary Constance, already mentioned. Her letters, now in the Suffolk Record Office, describe the founding of the school in 1872, and continue through to the handing over to the local education authority in 1913 when Miss Martineau was in her eighties. As well as firm supervision, she provided fun for the children: skipping ropes, small gardening tools, and a “rocking-boat” for the orchard playground. Every summer there was a special tea for the children at The Lawn, the Martineau residence, though this must have been a long walk for five-year-olds. Miss Martineau helped with the teaching on several days most weeks. This would have helped to alleviate the constant staffing problems described in the log book. There were frequent changes of pupil-teachers, many inadequate, late, ill, or uncooperative. For example: “Lillian Murray refused to teach the babies Feb 14th 1881”

An annual fun event was the Foresters’ Gala in July when the school closed. The children were always tired the next day with attendance down. National events were marked by holidays, such as Queen Victoria’s Golden Jubilee on 20 June 1887 and the coronation of Edward VII in 1902. Other half-day holidays celebrated village events: 20 September 1878 St Mary’s church was re-opened after lengthy repair and restoration, and 21 July 1880 was the Sunday School centenary. On 20 June 1899 the children had the morning off to go to the wedding of Helena Frost, the assistant teacher. On 22 December 1910 all the village schools closed for the memorial service for John Martineau. On 21 June 1911 there was a national holiday for the coronation of George V, and Miss Martineau gave all the children a coronation mug.

The log book also records mischief, which some children must have regarded as fun. They were accordingly punished. Six-year-olds Ruby Nunn and Percy Parkinson spent a happy Saturday morning filling the drains from the boys’ lavatories with gravel. On 9 November 1894 Fred Rust “stole a girl’s thimble and told stories”. One of the Jaggard boys was “very rude” in the playground. On another Saturday back in 1883 six infants broke into the school, damaged the clock and the teacher’s desk. In 1901 we have our first infant smoker: Edward Gaught “reprimanded for cigarette-smoking”. In 1910 a ” disobedient girl” Ethel Sturgeon fell under the rocking-boat and hurt her thigh.

It is a relief to read the faliliar tales of energetic wrongdoing, what is so sadly different from today is the constant tally of childhood illness. When we watch the lively healthy children of today we should remember Nellie Oxborrow aged five who died in the whooping cough epidemic of 1901, and two six-year-olds, Maude Bull and Alfred Rust, who died in 1911 of consumption.

The log book is not so carefully kept after Jane Chasteney’s retirement. Perhaps the record-keeping takes a different form once the school is in the hands of the local authority. Certainly during the handover period more and more leaflets, forms and insructions arrive and paperwork must have trebled. On the final page, dated 1916, there is a list of the managers:Rev. A.C. Briggs, Mr M. Martimeau, Mr Etheridge, Mrs C. West, Mrs M. Martineau, Mr Granger, Correspondent Mrs West, Four Ashes. Head Mistress Mrs Carrol-salary £72.10s 0d. per annum; Miss Reeve-salaty £35.0s.0d. per annum. Cleaners Mrs Hubbard £6 per annum. Accommodation 64, Average attendance 34″.

In the census of 1871 it is recorded that lodging with Wlliam Jaggard Master Builder of the river path was William Fisk age 19 from Bramford, a carpenter apprentice. They were building the new school. This was obviously the new infants school.

From the census of 1891-Jane Chasteney age 38 school teacher from Gt Yarmouth, boarder with Henry Drake (plumber & decorator) age 56 in the High Street.

Our thanks to James & Lorraine Bailey

The Building of the Infants School

When the Martineau family decided to establish a separate school for infants in the village they could only find one suitable piece of land in the High Street.

It was part of an orchard attached to Sideways House, the owner John Proctor was also a farmer. He was reluctant to sell the piece of land to the Martineaus and he would only agree to sell a small piece measuring 86 feet by 24 feet. This was barely big enough to build the school: furthermore he would not sell it for less than pound;100. As there was no other land available Mrs Lucy Martineau and her daughters Caroline and Mary Constance had no other choice but to buy this piece of land.

With just this small piece of land it would mean that the children would not have a playground. When the school was built it left a small area in front of the building, hardly big enough for the children to play in.

On the 4th of October 1870 Mrs Lucy Martineau and her daughters signed an agreement with John Proctor to buy the land for £100. The tithe was sixpence a year.

William Jaggard, a local builder was given the commission to build the school at a cost of £240. In 1871 it opened. The Martineaus had decided that the school would be nondenominational,, i.ei not affiliated to any particular religious group.

In the beginning all three were involved with the running of the school and the two sisters took an active part in the schools activities. Mrs Lucy Martineau died in 1887 and Caroline had other interests in later years. It was Mary Constance who was the driving force behind the school.

There are a number of letters in the Suffolk Record Office from her, vigorously speaking up for the school. In 1907 John Proctor’s widow had died so Mary bought the adjoining house and land, she then took part of the orchard and had it turned into a playground for the children, after which she sold the remaining land and house. She estimated that the playground cost her about £50 to £60.

Caroline had died in 1902 so it left Mary Constance to carry on by herself. In 1913 Mary, by this time in her eighties and not in the best of health, decided that it was time to hand over the school to the County Council. She informed them that she would be prepared to hand the school over free of charge subject to certain conditions. One was that the school should remain nondenominational, also that an apple tree which stood in the playground (a variety called Doctor Harvey) was to remain, and that the fruit from it to be sold by the school mistress and the proceeds used for the benefit of the children.

The apple tree is still remembered by some of the older residents of Walsham. When the school closed in the 1960s the owners of Sideways bought back part of the playground and incorporated it into their garden. In the garden of Sideways today stands an old gnarled apple tree, a Doctor Harvey, this is almost certainly the original tree mentioned by Mary Constance Martineau.

I am indebted to the following for their help: