On the “Verge” of Extinction 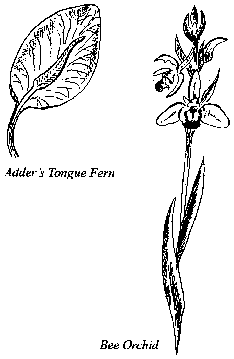 In Suffolk there is now very little natural meadow-land habitat left and most pasture has been sown with fast growing grasses. This is why roadside verges are so important; they are some of the last remaining areas of unimproved landscape left, having generally been uncultivated and unsprayed. From old maps we can see that many country roads are very old and would not have been tarmacked until the earlier part of this century. They were trade routes between markets and often had wide verges for grazing stock and sometimes haymaking. Most road verges have not changed because there is usually a hedge and ditch boundary with the land beyond.

A wide range of plants

The plants that grow on the road-side show the variation of soil types. Some species, like the aptly named travellers joy like chalky soil while orchids like clay. They may also show how the land has been managed in the past.

Walsham has a mixture of soil; clay on the higher ground and lighter valley meadow land along the stream. One of the most interesting verges historically is the Rickinghall road on the eastern boundary. This road ran along the edge of a large area of common land called Allwood Green and the roadside verge today still grows plants that were typical of closely grazed pasture land, such as ladys’ bed straw, germander speedwell, primroses and cowslips. On the western side of the parish, Readings Lane which leads up to Stanton Upthorpe, has the last struggling remains of flora typical of a woodland clearing including wood anemone and yellow archangel. When the last of these disappears, only the name Readings or Ridings meaning a ride cut through woodland, will be evidence of the past of this area. On the old airfield at the top of Readings Lane, Suffolk Wildlife Trust has a ‘Roadside Nature Reserve’ marked at each end by a white post. This is another piece of old meadow land that by pure luck has escaped being destroyed; this time because the road was re-routed when the airfield was cleared. The 150 metres of verge here has plants like adders tongue fern and bee orchid. The Suffolk Wildlife Trust has 160 of these roadside verge reserves in Suffolk; each one has a special management programme according to the special plants that grow on it. They are generally not mown in late spring but are cut in late September so that plants can set seed.

Sadly some verges have been encroached upon, most often by road widening, but also by hedges being removed and ditches filled in. Added together the total area of roadside verges in Suffolk must add up to quite a large number of hectares. Even the relatively new motorway banks are developing characters of their own. In the last few years the County Council has become much more sensitive about its verge mowing policy. On A and B roads just 1.2 metres are mown twice a year and unclassified roads are mown once a year. This generally leaves a metre or more to grow and seed naturally and there have been some wonderful displays of hedgerow geranium and field scabious recently. When left in their natural state the roadside verges are a joy in the spring and in autumn the grasses and seed heads enrich the view from our car windows. The verges are important indicators of the natural floral habitat before the use of chemical fertilisers and herbicides. Often taken for granted the are gardens in themselves and also tell us about the past.

More and more people are feeling the need to discover their ancestral roots by exploring their family trees. When the name in question is one mentioned in the Field Book of 1577 it becomes of interest to local as well as family historians. I had always assumed that Michael Finbow was a very ordinary tradesman grubbing out a living at the far east end of the parish but when Tony Finbow of Bacton produced Michael’s will, it showed him in quite a different light. He had a house on a pightle of pasture of just over 2 acres where, no doubt, he kept a cow, a few chickens and geese and a pig. He probably grew his own vegetables and had a small orchard. There were three houses to the south-east of High Hall just off the footpath to Gislingham, known as Nether Way. His was the one furthest east. We didn’t find the sites of these houses during the field-walking survey – they are probably under the small reservoir now.

Michael’s will shows him to be a shoemaker and quite a successful one as he leaves considerable sums of money to his family. What is unusual is the fact that he made special provision for his children should any one of them become ill. At a time when illness and death of children was commonplace, this shows him to be a very caring father worrying about the children whose mother had recently died.

The parish registers record some birth and deaths of Michael’s family. His wife Joan died in 1577 but he remarried almost immediately needing someone to look after the younger children. He died the following year. His second wife Margery lived until 1598 – let’s hope she did look after young Michael.

(Work still to be done to complete this gap)

Alfred William was Tony’s grandfather. He was born in 1854. He moved to the farm in Bacton in the early 1900s having previously farmed at Wyverston. Unfortunately he was kicked by a horse in 1905 which proved fatal. His wife and youngest son continued farming at Bacton until she retired in 1919. Tony’s father then exchanged farms with his younger brother which is why Tony is now at the farm in Bacton.

The Bury Post – 26th August 1789: ‘To be sold at auction on Monday, 30th August 1789 and the following day, at the shop of Esther Ellis in Walsham le Willows, the remaining part of the stock of linen, woollen drapery, hosiery and haberdashery, a thirty hour clock and other kitchen furniture, Catalogues may be had on Thursday at the White Horse, Badwell; the Pickerell, Ixworth; the Cock, Stanton and most of the public houses in the neighbourhood. Sale begins at 10’clock.

In 1790 the Bury and Norwich Post had risen in price to 3½d. The issue of the four page journal dated 3rd February 1790 carried a notice to debtors and creditors. ‘All persons who stand indebted to, or to whom the estate and effects of Henry Wenlock of the Blue Boar in Walsham le Willows may stand indebted, are desired to send in an account thereof to William Bethell of Walsham aforesaid, on or before the 20th February 1790.’

On 1st September 1790 notice was given that a property and land was for sale in the parish. ‘A copyhold estate, late the property of the widow Hawes, deceased, consisting of a very good farmhouse, barn, stable etc. and about eight or nine acres of exceedingly good arable land now in the occupation of Mr. Edmund King.’ Also a notice appeared asking for a beneficiary to make contact. ‘Notice to Heir at Law: Mr John Hawes of Walsham le Willows, Suffolk having been absent for some years and being heir to part of the estate of the widow Hawes, deceased, he is desired to send his name and place of abode to Mr. Robert Hawes of East Dereham.’

In February 1791 notice was given of an auction in Walsham. ‘To be sold by auction on Monday 21st at the Blue Boar in Walsham. All that capital messuage or double tenement with a large garden in front and a back yard, containing about one rood of exceedingly rich land. Also a single tenement in the same yard with good common right to the same belonging, situated upon the best piece of common in Walsham aforesaid called Cranmore Green in the occupation of William Baker the younger and others, worth at least £7 a year. Further particulars may be had of Mr. Sparke, attorney at Walsham.’

In October 1793 Thomas Warne, a Walsham shopkeeper, placed a notice in the Bury Post to inform his customers and the public in general that ‘. . . he has just returned from London with a large assortment of goods consisting of linen, cotton and woollen drapery and is determined to sell them at much lower terms than he has been able for several years past, particularly prints, callicoes, dimities, muslins, Irish linens, cotton and worsted hose, modes, black and white lace, bedding of various sorts and woollen drapery in general. T. Walne will sell spices, brooms and brushes with general grocery articles as good and as cheap as any of the trade in Bury can sell them during the time of the Fair’

In the issue dated 23rd April 1794 notice was given of a house to be let in Walsham, occupation to be taken up at Michaelmas. ‘A dwelling house, replete with every convenience for a private family, consisting of a kitchen, three parlours, four bed-chambers with garrets over them, a back-house, dairy and other offices attached, a two stalled stable and hay chamber over it, a garden planted with fruit trees and a large yard. The premises are situated in Walsham in the Willows in Suffolk at a small distance from the church and near the butcher and baker. For many years in the occupation of John Elliot, surgeon.

Walsham is a pleasant village to which there is a post three times a week, ten miles from Bury St. Edmunds and five miles from Botesdale and within two miles distance of the turnpike road leading from London to Norwich and Yarmouth. For further particulars apply to William Youngman at Walsham’ [This property was almost certainly Priors Close near the Priory Rooms].