The Nonconformist movement started in England in earnest shortly after the Reformation albeit in a very secretive manner as there were very severe penalties for those breaking with the established church, including execution.
There is evidence that they were active in Walsham during the 17th century. A lady by the name of Ann Burrow in 1653 was put in a hole (grave) in Thomas Cook’s “orchardyard”.
Nonconformist deaths in the village were seldom recorded, so it is rare to find mention of these two as the established church was the only body to record deaths, and Nonconformists were not considered worthy of mention. They possibly were not the only ones in the village to be buried in this manner. It is most probable that Thomas Cook’s house at Crownland was used as a meeting house for worship. At that time there was not a purpose built place of worship for them in Walsham.
The Nonconformists were also subject to other restrictions. In 1673 an Act of Parliament, the Test and Corporation Act, was passed during the reign of Charles II, forbidding them from holding any military or civil office. They were also not allowed to obtain any degrees from Oxford or Cambridge Universities. This was ostensibly to protect the King from his enemies.
This act also applied to Roman Catholics and Jews. It was not until 1828 that the Act was finally repealed.
In spite of all the obstacles they continued to flourish. Perhaps the biggest expansion of the movement came during the 19th century, particularly in the industrial areas of the country. It quickly spread to towns and villages throughout the land. Walsham was no exception. In the early 19th century we had three Nonconformist Chapels in the village. 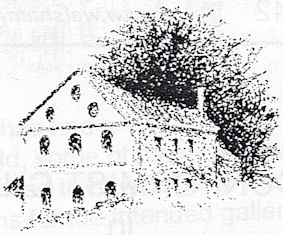 The Strict Baptists were one of the first groups to establish a Chapel in Walsham, in 1818. The trem strict was not used in the accepted sense, for it meant among other things “restricting” communion to those who had been baptised by total immersion. They were also known sometimes as Particular Baptists. Unfortunately very little detail is left of this early Chapel other than a few names. Before this date the Baptist followers in Walsham were affiliated to Stoke Ash Chapel near Eye.
The 1818 Chapel was situated along the Finningham Road on the right of the first bridge. The site is now overgrown. This Chapel was obviously too small for the growing congregation so a new and larger Chapel was planned. Another piece of land was purchased adjoining the the existing Chapel grounds.
The cost was estimated to be £450. An architect Mr. Bland of Beccles received the commission to design the new Chapel, and work commenced on building the new Chapel in 1865. On Tuesday January 22nd 1867 the Chapel was opened with many Baptist dignitaries from a wide area of East Anglia attending. The celebratory services continued the following Sunday with several preachers.
In design it was very similar to the existing Congregational Chapel. It was built of a darker red brick with arched windows at the front, inside there was a gallery on three sides of the building. This feature is often found in Nonconformist Chapels. There was also a burial ground where a numer of interments were made, and the gravestones are still there amongst the undergrowth.
As with so many of these Chapels the congregation gradually diminished, until after World War II it was decided that it was no longer viable, plus it was prone to flooding on occasions being so close to the river, so sadly in 1948 it was demolished and nature has taken over the site.

The Independents were also known as the Congregationalists. Not a great deal is known about them in Walsham in the early 19th century. It is known that there were three Chapels in the village in this period. The position of the Baptist Chapel is known, as is the early Wesleyan Chapel. Although there is no written evidence of where the Independent Chapel was, a map of Walsham in 1818 notes the position of a Chapel on the river path in the grounds of Linnside. This possibly could have been the Independent Chapel.
The Bury Post of 1827 mentions the sale of a Chapel together with two cottages in Walsham. The two cottages are still there today known as Linnside and River Cottage. On the tithe map of 1842 a Wesleyan Chapel is marked in the same position. As there was already a Wesleyan Chapel by the butchers, the river path Chapel could have been bought by a Wesleyan breaaway group in the 1827 sale from the Independents. The Wesleyans became fragmented during the 19th century. A breakaway group, the Wesleyan Reformers, bought the existing Chapel by the butchers from the main Wesleyans in 1854. 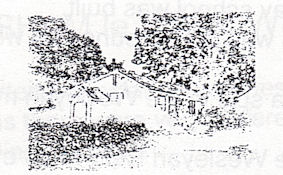 Another Chapel was the Gospel Hall in Palmer Street. This as a Plymouth Brethren Chapel. The movement started when a group of men in Dublin in 1827 started to hold evangelical meetings in private houses, the most prominent of them was the Reverend John Nelson Darby, a priest of the Church of Ireland. The movement spread to England and amongst the most well known was the movement in Plymouth. This became the accepted name for those following this evangelical group, hence the name Plymouth Brethren. In 1830 the Reverend Darby left the Church of Ireland to follow his chosen evangelical movement. Incidentally his godfather was Admiral Lord Nelson and this was how he aquired his middle name.
In about the 1890’s the Plymouth Brethren movement in Walsham started to meet in a cottage close by where the future Gospel Hall was to be built. A piece of land was purchased for a Chapel in Palmer Street, and a building described by some as a bus or tram shelter from Ipswich was bought to serve as a Chapel. It cost £25, and was transported from Ipswich by a Mr Hazel of Botesdale.
As it was made from corrugated steel sheets, it had to be modified. The inside was lined with wooden panels and other alterations were made to it. The total cost, including the purchase, came to £58.8shillings.
The land on which it stood changed hands a number of times, one of the earliest deeds state that it was purchased from Sara Clarke for £20 by Alan Robathan in 1918, the land measured 60 feet by 50 feet. It was sold by him in 1922 to a group of trustees who later purchased another small piece of land adjoining the Chapel. During its heyday the congregation numbered around 35 people. There was also a Sunday School. It often had up to 50 children attending, which was quite a good figure for such a small Chapel. During the 1930’s the Sunday School was run by Mr Sharman and his daughter Elsie.
The congregation of this Chapel gradually declined, so in 1996 it closed. In 1999 a private house was built on the site. 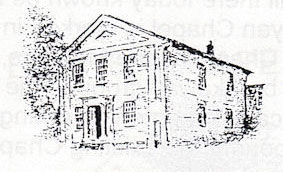 This Chapel with its classical facade has had a varied history. It started out in 1817 as a Wesleyan Chapel, it cost £420 to build, some of the money was given by local members and some was borrowed. It was intended to have a gallery inside but there were not enough funds for this, the projections for the intended gallery can still be seen. At the rear of the Chapel a Sunday School was built.
One of the prominent Wesleyans was John Youngman who is buried in front of the Chapel together with his wife. During the mid 1840’s there was a split in the Wesleyan movement and up to a third of the Wesleyans left the Society. A breakaway group known as the Wesleyan Reformers eventually aquired the Chapel and rebuilt it in 1854. Different brick work can be seen at the back of the building, possibly part of the original Chapel. In 1858 the Congregationalists had bought the Chapel from the Wesleyans.
The Congregationalists are still with us today and very much active, of all the Nonconformist movements the village has known they are the only survivers.

For a short time we also had a Salvation Army movement in the village. This was situated in the grounds of Fernside along the Finningham Road. It was basically a wooden hut adapted for worship. The movement was run by the daughters of Peter Nunn. It opened in 1922 and by 1929 it had closed down.
One cannot help but admire the efforts of those early Nonconformists. Most were of modest means but they had the courage of their convictions, by sheer hard work and overcoming many obstacles they achieved their hopes and dreams of a Chapel to call their own. Now all have passed into history, except one.