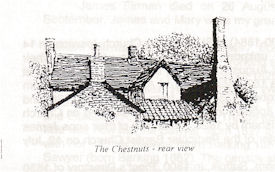 The Chestnuts is set sideways on to the road, as are several houses in Walsham. The reason for this is sometimes that the house faced a farmyard or, more often, shared a well with a neighbour.

The house is timber-framed and rendered, with a brick gable on the south end. The roof is covered with pantiles. It was built c. 1600 replacing an earlier house on the site and has later extensions.

Most of the houses in Walsham were, at one time, copyhold or customary. They belonged to the lord of the manor who leased them to tenants in return for rent in the form of money, chickens, eggs, oats and services (such as ploughing and haymaking) rendered. These houses could only be sold or passed on to another generation through the manor court where the incoming tenant paid a fee to the lord. Because Walsham has many court rolls (proceedings of the court) surviving, it is possible to trace the owners/occupiers through the years. A few houses were held freehold with the owners paying cash rent and the freedom to sell their houses without attending court. These houses don’t appear in court rolls so are more difficult to trace than copyhold ones and The Chestnuts is one of these.

Relying on rentals of the manor (a list of all tenants and their property) and surveys that give the same information plus the position of the property in the village, it is possible to find the owners of freehold property at given dates. The Chestnuts can be traced in the following archives:

One further complication – the Field Book states that John Parker daid he held his tenement from the Manor of Bricett not from Walsham manor. The Prior of Bricett paid to Walsham manor ½lb cumin as rent pa (Ref: Walsham manor account rolls SROB HA 504/3). Pepper-rent was paid elsewhere in Walsham but perhaps The Chestnuts paid cumin-rent.

The Firman Family at Walsham le Willows and beyond

Three generations of the Firman family worked as carriers at Walsham through most of the 19th century–George Firman, his son, James, who ventured into Essex for a time to work on the railway – and grandson Eldred Firman into the early 20th century. Their children were raised at Walsham, but most left for employment elsewhere and few returned.

George Firman was born at Coddenham, Suffolk, in 1800. Pigot’s Directory of 1830 names him as a carrier operating from the Bull at Ipswich to Walsham le Willows on Friday mornings; he made the outward journey via Stowmarket on Thursdays; White’s Directory and Gazetter of 1855 states that he is a carrier from Walsham to Bury on Wednesdays and Saturdays, and to Elmswell Station four days a week.

The Census Returns for 1841, 1851, and 1861 refer to him as a carrier, but in 18781 his occupation is stated as coal merchant. The Vestry Books at Walsham show orders for him to deliver coal, and at the same time for his son, James, to deliver other goods.

George died on 6th October 1873 and was buried in Walsham, Mary, his wife, went to live with their daughter, Harriett, at 79 Barnwell Road, Brixton, Surrey, where Mary is shown as a widow and annuitant in the 1881 Census. Mary died at Brixton in December. George and Mary were my great great great grandparents.

Generation No. 2 – the children of George Firman and Mary Haddock

James Firman moved away to work on the railway. He married his cousin Mary Haddock (about 1827-1903) at Myland (Kelvedon), Essex, on 6th January 1850. The Certificate of Marriage states his occupation as railway porter. James and Mary had four known children and adopted another: William, born 1851 at Lexden, Essex; Henry George (aka Harry), born about 1856 at Kelvedon, Essex; Eva Harriett, born about 1857 at Kelvedon, Essex; Eldred Frederick, born 18th January 1859 at Kelvedon, Essex. Florence Palmer, nurse child, age 11 months, appears with them in the 1871 Census of Walsham; by 1881 she is Florence Firman, daughter. One family source names two other children, George and Minnie, but there is no supporting evidence.

Ther Census of 1851 shows James and Mary living at North Street, Lexden, Colchester, with a son, William James, age 5 months. The family members were in different places at Census time in 1861: James was lodging at the Lamb Inn, Sible Hedingham, Essex, while Mary and four children were at Coggeshall Road, Kelvedon, Essex. By 1871 the family was together at Finningham Road, Walsham, and James was working as a carrier. Their eldest son, William, was no longer living at home. The Bury Free Press reported damage to James’ home, next to the blacksmith’s opposite the chapel, caused by flooding on 3rd August 1879. In 1881 we find that their daughter, Eva, had also left the family home on Church Street; James was a master carrier, employing one man (his son Eldred). James was still an employer in 1891, though he and Mary now lived alone on Church Street, as they did in 1901. The 1883 Post Office Directory states that he was carrier and coal merchant at Walsham, travelling to Bury on Wednesday and Saturday, and to Elmswell Railway Station daily.

James Firman died on 26th August 1912 and was buried at Walsham on 4th September. James and Mary were my great great grandparents.

Wlliam Firman also moved away from Suffolk. He was lodging at Mill House, Wickhambrook, Suffolk, in 18561, working as a miller. By 1861 he was married to Elizabeth Medlyn (born Helston, Cornwall about 1825), and a miller, living at Wellington Mill, London Road, Barking, Essex. He remained at Wellington Mill for tyhe rest of his life. William and Elizabeth had three children at Barking: Edwin N. Firman (1885), George Firman (1858), and Elizabeth A. Firman (1860). Things had changed by the time of thec1881 Census. His wife was now Martha Sawyer (born 1827 in Dagenham, Essex). She brought three children with her –Emily Sawyer (born Barking 1859), Ellen Sawyer (born Barking 1861), and Mary Sawyer (born Barking 1862). The Census shows Emily as William’s daughter, and the other two as stepdaughters. William and Martha had produced four more children: Margaret J. Firman (1864), Elizabeth (1867), John (1868), and Catherine (1871). William’s occupation was shown as miller journeyman (artisan) in 1881. His son, George was still unmarried and at home, working as a stockman/agricultural labourer, John was aged 13, and Catherine aged 10;Margaret was at home, single, and working as a domestic servant. Only John and Catherine were at home with William and Martha in 1891, both single. John had joined his father as a miller, and Catherine was an assistant. William had retired by 1901 and John was the miller and still single. Daughter Margaret had returned home, unmarried, aged 37, and worked at home as mother’s domestic help (Martha was now aged 73). Daughter Catherine had married a Mr. Thomas and emigrated to Canada, but was home on a visit with her son Wesley Thomas, aged 2 years. William’s other children have been traced. William died at Barking in 1906.

Little is known about Mary Ann Firman. The Particular Baptist Chapel Register for Walsham records her birth, and her baptism on 22nd July 1836 when she was named as Maryann. The 1851 Consensus records Mary A. Firman, age 20, general servant in the household of George Bayley at 5 Brunswick Terrace, Camberwell, Surrey.

Harriett Firman was with her parents in Walsham in 1851, but by 1861 had married Mr. William Hook, a boot maker, lived in Lambeth, Surrey, was widowed before 1871, and had two children: William, born about 1859, a medical student in 1881 and later surgeon; George, born about 1861, watchmaker in 1881. George is described as lame in the census of 1871, and was married, living in Clacton-on-Sea, with his wife and daughters in 1891 and 1901. William was living with his mother in 1891, but was married by 1901. His career as a surgeon is documented. It is interesting to note that the 1881 Census shows Kate Firman, niece of Harriett (daughter of her brother Haddock), in the household as a servant.

Elizabeth Firman appeasrs on the Birth Register of the Particular Baptist Chapel on 22nd July 1836 as Bettsey, and in the Baptism Register of St. Mary’s Church on 29th April 1855. She did not marry. Her occupation in the 1861 Census was dressmaker and she is shown as living with her parents. however there is also an entry in 1861 for Elizabeth Firman, of the right age and place of birth, in the home of her uncle, James Haddock, at Stowmarket Road, Old Newton, where she is described as niece and invalid relation. She died at Walsham and was buried on 2nd November 1877.

Maria Firman: at the age of 13 years Mariah Firman is found at St. Giles Terrace, Norwich, working as a servant in the household of William Hunter (1851 Census). The 1861 Census shows a Maria Firman, age 23, living in the household of Anne Bridges on Church Street, Walsham, and working as an infant schoolmistress. I am not convinced that this is the correct Maria but can neither prove nor disprove it. I have not managed to find her in 1871, but by 1881 she was employed as housemaid in the home of Henry Whitbourn, gentleman, at East Street, Barking, Essex. This was close to her brother, William, at Wellington Mill. Her age is shown as 45 years. Ten years later she was a lodger, age 53 years, at 4 Fisher Street, Barking, Essex, single, and an infant school teacher. Perhaps this confirms that she was in a similar position in Walsham le Willows in 1861. Aged 63 and single, she appears in the 1901 Census at 30 Linton Road, Barking, Essex, as housekeeper to Mrs. Lavender Burrows, widow. My grandmother, Eva Firman (about whom more follows), would recall that Maria Firman was a stately and religious person, and the family inherited from her three framed black and white prints, one of Christ with the Samaritan woman at the well, the others being of children at their mother’s grave. I remember them in my grandparents’ home, and they presently hang in my dining room. Maria died in about 1929.

Haddock Firman was another travelling member of the family. In 1861 he was an agricultural labourer living with his parents in Walsham. He married Kate Brook and their first child, Kate Elizabeth, was born in Walsham on 25th November 1866. He married Kate Brook and their first child, Kate Elizabeth, was born in Walsham on25th November 18966. Harriet Maria was born in Pakenham in 1868. 1871 finds Haddock in Back Fold, Armley, Leeds, Yorkshire, working as a maltster, and a son, George, born about1871. A daughter, Rose, was born in Leeds in about 1877. Rose was described as feeble-minded in one census return. By 1881 Haddock and his family were living at Wellington Mill, and Haddock was working as a farm labourer. His daughter Kate, as mentioned above, had left home and was working as a servant in the household of his sister Harriett in Lambeth, Surrey. She later went to South Africa, married Benjamin Smith, and her granddaughter lives in Sussex. In 1891 Haddock was living at 34 Union Street, Barking, Essex, working as a maltster; another child, William, had been born. By 1901 Haddock had remarried, was working as a general labourer, and his children Rose and William were still at home. George became a general labourer, and William worked as a labourer in the India Rubber industry.

Bob can be contacted at Dearne View, 420 Darton Lane, Mapplewell, Barnsley, South Yorkshire, S75 6AL and would be pleased to receive any further information. e-mail: bob.hawes@lineone.net

‘A new wall letterbox has been opened at Four Ashes for the accommodation of residents in that locality.The box is cleared by the messenger from Ixworth at 5.20pm on weekdays and 10.35am on Sundays.’