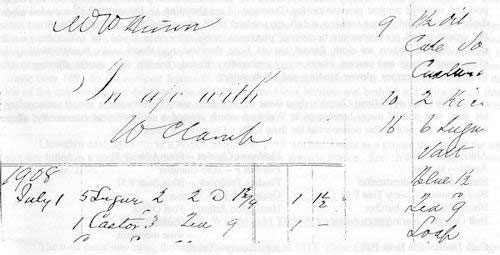 A small household account recording purchases over the three year period 1908–1911 from William Clamp, Family Grocer asnd Draper, Walsham-le-Willows, provides an insight into both the nature and operation of the business and the household management of one customer another prominent Walsham businessman. The account book opens on July 1st 1908 with the following shopping list.

One is struck by the simplicity of the list. Five or six lbs of sugar, 1½ gallons of oil and ¾ lbs of cheese were regular weekly requirements. Starch, tea and cake soap followed on a fortnightly basis with rice, matches, salt, currants, bunflour, grate polish, cocoa, Cakeoma mix, lemons and castor sugar figuring monthly. Very occasionally coffee, semolina, bacon and butter were ordered together with the odd tin of salmon, a jar of marmalade, plums (prunes?) and bloater paste.

Time of year made some difference for in July there is a note of jam covers, while in October, spice, peel and nutmegs suggest preparation for Christmas. Late shopping on December 22nd included a box of dates, ½lb of almonds, some tobacco, a doll, toys valued at 1d, chocolates and crackers! Yet mixed amongst the groceries and provisions are occasional purchases, some only once a year, of calico, hairpins, lace, ribbon, damask, cotton, tea cloth, flannel, corsets, hose, doormat, rug, shoes, socks, boots, towelling, lamp glass, tureens, cups and saucers, plates, mugs, embroidery, thread, needles, tape, elastic, shirting, cretonne, veiling, collars, buttons, gloves, binding and handkerchief.

The stock of William Clamp’s shop alone would render visits to town shops almost unnecessary, yet his shop was one of the many businesses in Walsham which created a self-sufficient community, all needs supplied on the spot as this commercial list from Kelly’s Directory shows.

Over a period of one month, the value of purchases from William Clamp would mount up to approximately £1 25 to £1.75 in today’s money. The account book shows acknowledgement of payments for one month’s goods at the end of the following month. This period of credit was a regular feature and only once in three years did Mr. Clamp accept part payment of the amount owed; terms were obviously fairly strict.

Mr. Clamp’s personal control is further evidenced in that over the three year period, he himself made all of the written entries of individual purchases save for a period of two weeks. He also receipted the monthly payments, except for rare occasions when his son Ernest, recorded in the year 1901 census as a grocer and draper like his father, took over this huge responsibility. Well, he was only 27 years old!

Although the Clamp family feature in the parish registers from 1763, the record is patchy with only five marriages. One branch originates in Wattisfield where William Clamp was born in 1826. He became a blacksmith in Finningham Road. (The blacksmiths shop was a little way past the entrance to Clay Street, on the right facing Finningham. It was demolished by Keith Robothom’s father when he bought the the land. Information source, Keith Robothom.) William died in 1913 aged 87.

His son George was born in Walsham in 1864. He was also a blacksmith and had three sons: Llewellyn, George, recorded as a blacksmith in Bridge House, and Clarence, a saddler and harness maker in Avenue House. William the grocer and draper married Alice, the milliner daughter of a Walsham coal merchant, in St. Mary’s Church on New Years Day 1877. Their children, Mabel born in 1878, Ernest born 1881 and Lorrie born 1892 do not however feature in Walsham’s baptismal records. Yet William contributed to the life of the community, was for sometime secretary of the Mens Institute and both he and Alice have a final resting place in our cemetery. Sadly Ernest and Lorrie were both killed in the last months of the Great War, and a brass memorial to them can be seen in the north aisle of Walsham Church.

Llewellyn died, aged 30, in a French hospital in 1919. He had fought as a private throughout the war and was killed in a tragic accident. He is buried in a service grave in France. See: ‘ It Is With Deep Regret’ James Turner. 1996

The trust came into being through an Enclosure Act of 1818. These Enclosures dramatically changed the face of the countryside with the enclosing of commons and turning them into fields, the stopping up of lanes, diverting of lanes, and in some cases streams were diverted.

In Walsham, Allwood Green, Cranmer Green and the big Lammas Meadow down the Badwell Road were enclosed. Clay Street was stopped up and a number of other lanes were also closed. Allwood Green was a common lying on the eastern boundary of the parish of Walsham; it was shared with Rickinghall and othere parishes and the tenants of the lords of the manors enjoyed grazing rights there for at least 500 years. The common was enclosed by an Enclosure Act dated 8th May 1818.

That part of the common now known as Town Farm containing 86 acres was awarded to the parish of Walsham le Willows. An extract from the Act follows:

‘…and whereas the said common or green called Allwood Green is in its present state incapable of any material improvement, but the same would become of considerable value and highly beneficial to the said parish of Walsham le Willows if the same was inclosed and discharged of the rights of common thereon, and allotted as a Town Farm, upon certain Trusts, in and as reduction of the Rate for the relief of the poor of the said parish, and subject to the provisions hereinafter expressed or referred to, and it would also be expedient that the same common should be exonerated from the paying of Tithes.’

The lord of the manor in 1818, Mr. James Powell, received compensation for his loss of manorial rights, the money for which came from the sale of Cranmer Green and the Lammas Lands which were enclosed by the same Act. Under the Act of Parliament which set up the Trust all resident occupiers of lands and estates in the parish of the annual value of £30, according to the ‘New Assessment’ were qualified as trustees to administer the Trust for the relief of the poor of the parish.

On the 1st of November 1818, the first effective meeting was held in the parish church when thirteen Trustees including the vicar attended. John Elliot was elected chairman. The place of the meetings varied, being sometimes at the church, sometimes at the Mens Institute or the Swan Inn but more frequently at the Boar (not apparently at that time called Blue). At the first meeting it was agreed that the whole of the Town Farm should be cultivated as a single unit under the direction of the Trustees, three of whom were appointed to form a committee of management. A mortgage of £1,000 was raised on the security of the land to finance the farming venture. In 1820 a cottage was built for a bailiff, there being no house on the land.

The Trustees had many discussions on a proposal to let some of the land as allotments and in 1835 it was decided to let 49 acres’…to such labourers as may be disposed to hire the same in allotments for spade husbandry at 25s an acre free of Tithe but subject to rates, it be expressly understood by the poor that the object in letting them land for cultivation is to better their condition, and through the assistance thus given to enable them in the first instance to ask for less Parochial relief, and ultimately as far as is practical to make the industrious labourer wholly independent of any other source for his subsistence other than his own honesty.’

To show that they meant business the Trustees ordered that the cultivators of an acre shall be required to take least one shilling a week less parochial relief. Each cultivator was bound to employ himself or one other man belonging to the parish, at least nine weeks in the year, and that three weeks of such employment shall take place sometime during December, January and February. For about twenty years the Trustees farmed half the land themselves and let the rest for allotments. The rents of these allotments were often in arrears and some of the land was left untilled; these unsuitable cultivators were eventually evicted by the bailiff. There is mention in the minute book of the Trustees of women not being allowed to hold any allotments if they were single or a widow; neither were men under twenty-six years of age.

The Trustees decided in 1885 to let the farm in its entirety so all of the allotment holders were given notice to leave. Mr. Fordham, the lessee of of the original half of the farm, was the first to lease all of the farm. In 1901 the lease was granted to a Mr. Jolly, who after two years got into financial difficulty. A distress warrant was signed by the trustees and a committee of management was appointed to run the farm temporarily. No satisfactory bid was made for a new lease until 1905 when it was let to various tenants until 1954 when, with the consent of the Charity Commissioners, it was sold to the existing tenant. The money raised from the sale was invested and the interest from the money is allocated to various deserving causes in the village.

‘A lecture by Richard Green of Ixworth on the Electric Telegraph took place in the public hall in Walsham le Willows. Mr. Golding, who introduced the lecture, observed that the subject was interesting from the fact that Walsham was soon to become a Post Office Telegraph Station. The lecture traced the wonderful power of electricity from the researches of William Gilbert in Elizabethan times to the present time. He explained the workings of the Telegraph System and the signs and symbols particularly those of Morse that had been adopted by the Post Office.’

‘The local Walsham le Willows fire brigade was called to Four Ashes Farm where, despite all efforts, fire destroyed an oat stack being the produce of 6 acres, part of a haystack and a wagon loaded with peas. It appeared that a little boy, about nine years old from Dr. Barnados Home, who was living nearby with the Rodwells had bought three boxes of matches and had confessed to a police officer to the crime. Fortunately the firemen had plenty of water nearby at hand and with many willing helpers it looked as though all the pails in the parish were brought into requisition. The farmer Mr. West is covered by insurance.’