Walsham-le-Willows is fortunate to have not one, but two pubs that have a long history.  The Walsham History Group review number 29 details that history for the Six Bells and the Blue Boar from from 1398 and 1447 respectively.

This Public House was first recorded as brewing and selling ale until 1360 and the first mention of its medieval name of Bays was when John and Alice Bray surrendered 1/2 an acre of land to a John Redwood and his wife Joan.

In 1817 it was recorded as being a public house named the ‘Boat’.  The Blue Boar website has details of what is on offer at this pub where there is good food and regular entertainment. 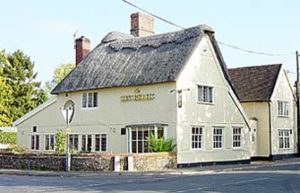 The first record of this establishment selling ale was in 1423. This house was known as ‘Fullers’ from around 1476 when John and Margaret Fuller lived there. The present building was said to be ‘newly built’ in 1523, and it finally became known as a Public House in 1844. It is first recorded as being named the Six Bells in the 1861 census.

Find more detail about the history of this public house on the Historic Trail Walk page and also in the History Group Reviews, numbers 19 and 29.  The Bells is a Greene King house and is a traditional country pub.  Food can be provided to order, for example, soup and rolls for the Bank Holiday walks that are involve a large group of walkers from the village. There are also regular barbeques that are held throughout the summer.